Skip to main content
Artificial intelligence: how little has to go wrong?

Autonomous weapons, driverless cars and friendly spies in the home

This report summarises a range of concerns about the current rapid advances in artificial intelligence (AI) and robotics - in areas such as lethal autonomous weapons, accidental nuclear war, fake news, online privacy, driverless cars, AI in the home, economic disruption and mass unemployment. Central to these issues are concerns that AI and robotics, if not properly regulated, will entrench the existing unequal power structures in society - and decrease the accountability of both corporations and governments.

To highlight our concerns, we carried out a short survey of concerned scientists and technologists, mainly members of Scientists for Global Responsibility. Over 80 percent of the respondents believed there was a medium to high chance of things going badly wrong with AI, while 96 percent said AI needs more regulation. 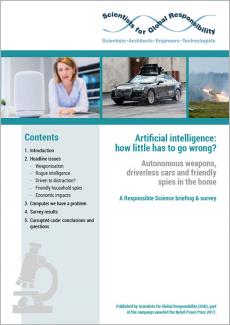