Skip to main content
An alarmist's guide to climate change

Feedbacks and tipping points are being dangerously downplayed in the climate debate, argues Prof Bill McGuire, University College London. As climate protests - including the School Climate Strike - gather momentum, he argues it’s time for some healthy and realistic alarmism.

Have you noticed how the term 'alarmist' has been hijacked? In the context of climate breakdown, habitat and wildlife loss and other environmental issues, it has become synonymous with scaremongering; with the voice of doom. In certain circles it is frowned upon and judged to be a hindrance to getting the global warming message across. Iconic broadcaster David Attenborough is the latest to express the view that 'alarmism' in the context of the environment can be a 'turn-off' rather than a call to action. But are such viewpoints justified, especially when our world and our society teeter on the edge of catastrophe? After all, the simplest, most straightforward, meaning of an 'alarmist' is someone who raises the alarm. Is this not what we need now more than ever; to be told the whole story – warts and all? The alternative, it seems to me, is to play down the seriousness of our predicament; to send a message that is incomplete, and to conveniently avoid or marginalise predictions and forecasts that paint a picture regarded as too bleak for general consumption. Surely, this is the last thing we need at this critical time?

No-one could ever accuse the Intergovernmental Panel on Climate Change (IPCC) of being alarmist. Because every sentence of IPCC report drafts is pored over by representatives of national governments – some of whom are lukewarm or even antagonistic to the whole idea of climate change – the final versions are inevitably conservative. The closest the IPCC has come to sounding an alarm bell can be found in its latest report Global Warming of 1.5ºC, published in October. Here it warns that emissions must be slashed within 12 years (by 2030) if there is to be any chance whatsoever of keeping the global average temperature rise (since pre-industrial times) below 1.5ºC, and fall to zero by 2050.

Notwithstanding the unlikelihood of achieving net zero global emissions in a little more than three decades, the pace and degree of climate change are about more than just anthropogenic emissions. They are also influenced by tipping points and positive feedback loops; sudden changes in the behaviour of ice sheets, carbon sources and sinks, and ocean currents, which can accelerate warming and its consequences way beyond the expected. Depressingly, but perhaps not surprisingly, the latest IPCC report's Summary for Policymakers [1] – let's face it, the only bit likely to be read by the movers and shakers – includes just one brief mention of feedbacks and has nothing at all to say about tipping points. The justification for this appears to be that because it is not possible to assign levels of confidence to such known unknowns, they cannot be included. But it is difficult not to conclude that the real reason is to tone down the threat in order to appease those governments that view climate change as a nuisance that they would like to go away.

The decision to bury concerns over tipping points and feedbacks in the depths of the full report rather than flagging them in the Summary is nonsensical. Touting the critical importance of drastic action while at the same time soft peddling the threat has the potential to backfire, providing the obvious get out: well, if the situation is not so bad, maybe the response doesn't need to be that urgent. If drastic, life-changing, action is being mooted, people need to know – have a right to know – why. They need to be presented with a complete picture showing how bad things might get – however scary or poorly constrained.

Bringing the potential consequences of tipping points and feedbacks into the equation inevitably transforms perceptions of the dangers we face. Suddenly, climate change ceases to be something vaguely inconvenient that we can leave future generations to deal with. Instead, it becomes far more of an immediate threat capable of tearing our world apart. Take sea level, for example. The IPCC's 5th Assessment Report, [2] published in 2013 and 2014, predicts – for a worst-case scenario – that global mean sea level could be about a metre higher by the end of the century. Bad enough for millions of coastal dwellers, but nothing compared to what our descendants might experience if a tipping point is crossed that sees the Greenland and/or West Antarctic ice sheets start to disintegrate in earnest. Models that do incorporate this, point to sea level rising far more rapidly. One suggests that the ice loss in Antarctica could occur at a much faster rate than expected, leading to global average sea level being more than 3m higher at the end of the century. [3] Another, based upon correlations between temperature and sea levels during the last interglacial, which ended around 115,000 years ago, proposes that sea level – in theory at least – could climb by as much as 5m by 2100. [4]

Worrying evidence that we might be at a tipping point in Antarctica comes from a very recent study on the rate of ice loss from 2012 to 2017. During this five-year period, Antarctic ice loss shot up threefold, from 76 billion tonnes annually, to a colossal 219 billion tonnes. [5] In total, more than 2.7 trillion tonnes of Antarctic ice has melted in the last quarter century, adding three quarters of a centimetre to global sea level. At the new rate, the contribution over the next 25 years would be 1.5cm. Not enough to worry about in its own right. If, however, the rate of increase is maintained over this period, then the annual rise by 2043 would be close to a catastrophic five centimetres a year. And this is without the growing contribution from Greenland and from the increasing expansion of sea water as the oceans warm.

And there are other causes for serious concern too. None more so than the behaviour of the Gulf Stream and associated currents (together making up the AMOC – Atlantic Meridional Overturning Circulation) that warm north-west Europe and also have a big influence on global weather patterns. In the distant past, surges of meltwater from shrinking ice sheets have caused the Gulf Stream to shut down. Now, it looks as if it might be in danger of doing so again as huge volumes of freshwater from the crumbling Greenland Ice Sheet pour into the North Atlantic, forming a so-called 'cold blob'.

The IPCC's official line is that another complete shutdown is 'very unlikely', but this is not the same as ruling it out. And there are certainly some worrying signs. The Gulf Stream has slowed by 15 – 20 percent since the middle of the 20th century and is now at its weakest for at least 1600 years. [6] The Gulf Stream has a tipping point, and – evidence from the past shows - can shut down in just a few years when this is crossed. The problem is that no-one knows when – or even if – this will happen. If it does, the ramifications will be sudden and widespread. The North Atlantic region will cool dramatically, particularly across the UK, Iceland and North West Europe, while sea ice will expand southwards (without, it should be emphasised, counteracting the trajectory of climate change). Sea-levels along the eastern seaboard of North America could rise at three to four times the global average rate. Further afield, changes to weather patterns are forecast to include a weakening of Indian and East Asian monsoons, which could have devastating consequences for crop yields. No-one is saying that the Gulf Stream is in imminent danger of collapse. Nonetheless, the threat is not insignificant, and as such should be soberly touted, not wilfully ignored.

Of the many and varied feedback loops and tipping points linked with rapid anthropogenic warming, perhaps the most disquieting involves the vast tracts of permafrost at high latitudes – both on land and beneath the sea. Trapped beneath this frozen crust are colossal quantities of methane, a greenhouse gas that has a warming effect 86 times greater than carbon dioxide. Fortunately, methane has a relatively short residence time in the atmosphere and breaks down to carbon dioxide within a few decades. Nonetheless, major outbursts of methane from the rapidly thawing permafrost are capable of causing climate mayhem with little or no warning. The geographic region of most concern is probably the submarine permafrost that floors the East Siberian Continental Shelf, where an estimated 1400 billion tonnes of carbon, in the form of methane, is lurking beneath a frozen carapace that is thawing rapidly.

According to Natalia Shakhova and colleagues, [7] as much as 50 billion tonnes of this is available for sudden release at any time, which would – at a stroke - hike the methane content of the atmosphere 12 times. According to a study published in 2013, [8] a discrete methane 'burp' on this scale, could advance global warming by 30 years and cost the global economy US$60 trillion – a figure close to four times the US national debt. Once again, the occurrence of such an outburst is far from a certainty and there are other issues to consider, including how much methane is absorbed by the ocean as it bubbles upwards. Notwithstanding this, there is a potential danger here that needs to be promulgated rather than hidden away, so that the scale of the climate change threat is clear to everyone.

So – to conclude – be alarmed; be very alarmed. But don't let alarm feed inertia. Use it instead to galvanise action. For your children's and their children's sake, stand up and do something about it. Drastically change your lifestyle; become an activist; vote into power a government that will walk the walk on climate change, not just talk the talk. Or – preferably – all three.

Bill McGuire is Professor Emeritus of Geophysical and Climate Hazards at University College London and a co-director of the New Weather Institute. His current book is Waking the Giant: how a changing climate triggers earthquakes, tsunamis and volcanoes. He is a signatory of an academics' letter in support of the School Climate Strike. 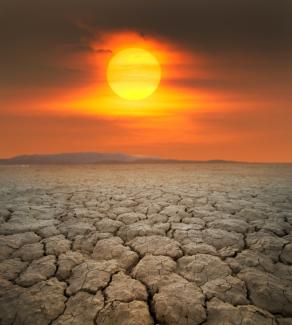