Skip to main content
The carbon boot-print of the military

Dr Stuart Parkinson, SGR, assesses the latest data on the huge carbon emissions of the world’s militaries – and argues that only reductions in military spending will lead to the necessary cuts in this form of pollution.

In 1997, international climate negotiations led to the agreement of the Kyoto Protocol, which set carbon emission reduction targets for industrialised nations for the first time. However, one of many compromises made to bring this treaty into being was that the emissions of military forces would be excluded from these targets. As US lead negotiator, Stuart Eizenstat, later stated, “We took special pains, working with the Defense Department… to fully protect the unique position of the United States as the world's only super power… We achieved everything they outlined as necessary to protect military operations… At Kyoto, the parties, for example, took a decision to exempt key overseas military activities from any emissions targets, including exemptions for bunker fuels used in international aviation and maritime transport and from emissions resulting from multilateral operations.” [1]

In 2015, negotiations led to Paris Climate Agreement, which limits the carbon emissions of all signatory nations. Under the operating rules of the treaty, military carbon emissions may be excluded – but the decision is left to individual countries. [2]

With military vehicles such as warships, fighter planes, tanks etc being major consumers of fossil fuels – see table 1 – this leaves a significant hole in the control of greenhouse gas emissions. But how large are military emissions in total?

(For comparison, the average new UK diesel car is rated at nearly 60 mpg [4])

With there being no requirement to control military carbon emissions at a national level, many governments adopt the position that it is not necessary even to calculate them. This means it is very difficult to estimate how large the problem is – which is convenient for the world’s militaries. However, some countries do publish data on the energy consumption/ fuel use of their militaries, and some even publish data on the carbon emissions of their military activities. From this, it is possible to start to estimate the size of the problem.

The place to start is the world’s largest military – that of the USA. While the government does not publish data on military carbon emissions, data on military energy consumption – both fuel consumption of vehicles and energy consumption of military installations – is available. Using this, Prof Neta Crawford, in a report published recently by Brown University, has estimated total carbon emissions of the US military from 2001 to 2017. [5]  So, in 2017, these stood at 59 million tonnes of carbon dioxide equivalent (tCO2e) – equivalent to the total emissions of an industrialised country like Sweden or Switzerland. [6]  Military bases and other installations were responsible for 40% of the emissions, with fuel use in military operations being responsible for 60%. These emissions included those from the network of hundreds of military bases that the USA operates around the world – although there is serious concern that the quality of data from many of these bases is poor. Crawford concluded that the US Department of Defense (the Pentagon) was the largest institutional consumer of petroleum products in the world.

But these emissions are only part of the story. We also need to count the carbon emissions of, for example, the arms industry that produces all the military equipment, the extraction of the raw materials used by this industry, and the impacts when the military equipment is used, i.e. in war. Table 2 summarises what I define as the ‘military carbon boot-print’, that is, the total emissions including all aspects related to military operations.

Data on the full range of military carbon emissions is much more sparse, and that which is published is more uncertain. Methodologies in some areas – such as war-related impacts – have yet even to be clearly defined. Some data does exist though for the arms industry and its supply chain. Again, Neta Crawford has produced estimates for the USA. [7]  For 2017, she calculated a total of 280 million tCO2e (although this is only a rough estimate).

Hence, we have a total of nearly 340 million tCO2e for military-related carbon emissions for the USA, approximately 6% of the national total. [8]  This figure includes a majority of the categories in the left-hand columns of table 2, but none of those in the right-hand one.

What about UK military carbon emissions?

The UK publishes much more data on its military carbon emissions than the USA. Direct emissions from ‘military aircraft and shipping’ are also included as a category in the national inventory, and thus the country’s reduction targets include the sector. [9]  Carbon emissions data can be found in the annual government publication, Sustainable Ministry of Defence. [10]  The latest issue – for 2017-18 – provides a number of figures for the carbon emissions of different components of the UK military, but unfortunately does not give an over-arching total. Based on the data provided in the report, I have calculated this total to be 3.2 million tCO2e.

In order to assess the emissions of the arms industry and its supply chain, we could look at the ‘corporate responsibility’ reports of the main suppliers – such as BAE Systems and Rolls-Royce. However, this would only include the direct emissions of those companies themselves and not the supply chain or raw materials. To estimate a total figure, I drew upon a carbon footprint methodology used by one of the leading researchers in this field, Prof Mike Berners-Lee of Lancaster University. He has used input-output economic models to estimate the carbon footprint of industrial sectors and areas of governmental spending. [11]  In the case of the UK military budget, this leads to a total carbon footprint of 13 million tCO2e, or 3% of the national total. [12]

Estimating a global total for military carbon emissions is even more difficult. Nations which are members of the Organisation for Economic Co-operation and Development (OECD) – which includes most of the world’s industrialised democracies – routinely publish data on energy consumption and economic activity. This can be used to estimate military carbon emissions, if the governments concerned have not compiled their own estimates. Many of these countries tend to spend a lower proportion of national income on their militaries than higher spenders like the USA or UK. However, many of the world’s other large military spenders – such as China, Saudi Arabia, Russia and India – are much less transparent. And these are the economies which are also often heavily based on fossil fuels. Hence their military spending is likely to be significantly more carbon intensive.

Based on the data that I have examined and the calculations that I have carried out for this article and previous SGR outputs on this issue, [13]  I estimate that the carbon emissions of the world’s armed forces and the industries that provide their equipment are in the region of 5% of the global total. But this does not include the carbon emissions of the impacts of war – the right-hand column in table 2 – covering sources such as fires, deforestation, health care for survivors, and post-conflict reconstruction. In a high emissions year – such as 1991 when fires raged in the Kuwaiti oil fields – this could be as high as 1%. [14]  So the total military carbon boot-print could be 6%. As such, this would make it a more polluting sector than, for example, civil aviation. And, of course, we should not forget all the other profoundly negative impacts of war…

At this point, it is worth asking what the Intergovernmental Panel on Climate Change (IPCC), the UN’s scientific advisory body, has to say on the subject of military carbon emissions. The answer is: nothing of significance. In its latest in-depth assessment report, published in 2014, the only mention of the carbon emissions of the world’s armed forces, or the industries that manufacture their weapons and other equipment, was in an annex which mentioned military activities which emitted some minor greenhouse gases – without giving any figures. [15]

While detailed data on military carbon emissions is distinctly lacking, it is noticeable that there are numerous military initiatives – at least in North America and Western Europe – which are helping to reduce these emissions. These include improving the energy efficiency of military vehicles, increasing the military use of electricity from renewable sources, and/or reducing carbon pollution more generally. Indeed, the current shift towards greater use of smaller, more fuel-efficient robotic aircraft – drones – as replacements for crewed military aircraft can lead to a reduction in military emissions. Neta Crawford’s data indicates that a significant proportion of the recent reductions in US military carbon emissions has been due to these types of changes, as well as a (current) reduction in large-scale overseas operations. It should also be understood that the arms industry and its supply chain are, in standard carbon emissions accounting, classified as part of the civilian economy, and hence subject to national targets.

However, while reductions in the carbon emissions of some armed forces and some arms corporations are welcome, we should be wary of a reliance on initiatives such as these. The title of a recent report by the US Defense Science Board gives away the real intention of such programmes – More Fight, Less Fuel. [16]  If the motivation is mainly to fight war more efficiently, the rationale of these programmes is dangerous and misguided. According to the IPCC, “Climate change can indirectly increase risks of violent conflicts by amplifying well-documented drivers of these conflicts such as poverty and economic shocks”. [17]  The key to real reductions in military carbon emissions is thus to shrink the huge military budgets around the world – which totalled more than $1,800 billion in 2018. [18]  And the key to shrinking these budgets is to reduce military tensions. So, rather than looking for new, lower carbon ways to fight wars, our governments should be prioritising measures such as diplomacy, international disarmament treaties, fair trade, poverty alleviation and, of course, reductions in carbon emissions right across the economy. Only then can we confidently achieve a more secure world.

Dr Stuart Parkinson is Executive Director of Scientists for Global Responsibility. He holds a PhD in climate science, and has been an expert reviewer for the IPCC.

This article is based on a presentation given at a conference organised by the Movement for the Abolition of War in June 2019.

5. Crawford N (2019). Pentagon Fuel Use, Climate Change, and the Costs of War. https://watson.brown.edu/costsofwar/papers/ClimateChangeandCostofWar

8. Based on officially reported US national emissions, accounting for land use changes – see: US EPA (2019). https://www.epa.gov/ghgemissions/inventory-us-greenhouse-gas-emissions-and-sinks

11. See, for example: Berners-Lee M (2010). How bad are bananas? The carbon footprint of everything. Profile Books. 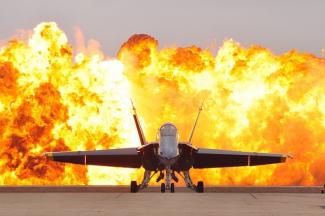