Skip to main content
Hacking the Earth: what could go wrong with geoengineering?

As we head towards the COP26 negotiations, Prof Bill McGuire, University College London, warns about the dangers of relying on geoengineering to dig us out of the climate crisis.

Geoengineering – the wholesale, deliberate, intervention in the climate system to curtail global heating – is the wrong answer to the wrong question. Instead of asking ourselves how we can tackle the symptoms of the climate emergency, we need to throw everything at treating the cause. It's not as if we are in the dark about this. We have long known that global heating and ensuing climate breakdown are a consequence of accumulating greenhouse gases (GHGs) in the atmosphere, as a direct result of humankind's polluting activities.

The solution is simple and straightforward, at least in theory; draw down the level of GHGs as rapidly as possible, aiming for net zero in as short a time as we can. The problem is, in practice, this is far from straightforward. To stand any chance of keeping below the 1.5°C global average temperature rise (since pre-industrial times) that marks the catastrophic climate change guardrail, we need emissions to fall by at least 45 percent by the end of the decade. Currently, we are on track for a measly 0.5 percent reduction. This dreadful news should be spurring governments to work harder to slash emissions in line with what the science demands, and it may yet do so. Worryingly, the snail's pace of progress on emissions cuts also seems to be encouraging the tinkerers; those who can't wait to resort to untried and untested techno-fixes in an attempt to bring temperatures or carbon emissions to heel in short order.

Gathered together under the broad, rather ambiguous, heading of 'geoengineering', today's portfolio of schemes to intentionally interfere with the climate can be traced back directly to post-war plans to weaponise the weather touted by cold warrior Edward Teller and others like him. Thankfully, such plans never got off the ground. It is vital that we ensure common sense prevails so that the schemes of today's hot world warriors also never bear fruit.

Broadly speaking, geoengineering technologies can be grouped together into those that seek to tackle rising global average temperatures by blocking incoming solar radiation and those that aim to slow or halt climbing temperatures by isolating anthropogenic carbon either before it reaches the atmosphere or by directly removing it. All are risky, expensive and – undertaken at scale – have the potential to be environmentally damaging. All, too, raise serious questions about accountability and the infringement of legal and human rights.

Of the various schemes being proffered today is one that probably carries some of the highest risks. It is predicated on the knowledge that major volcanic eruptions have a temporary cooling effect on the climate, and involves plans to mimic such an event by pumping particles into the stratosphere to reduce incoming solar radiation. It is true that massive eruptions do have a cooling effect, but that is not the end of it. Severe cooling linked to the biggest historical blasts was also accompanied by extreme and unpredictable weather, large-scale harvest failure, and famine. Indeed, the impact of volcanic cooling in the years following the 1815 Tambora eruption (in Indonesia), was great enough to trigger the last, great, subsistence crisis in the western world, widespread unrest in Europe, and the last armed uprising in the UK.

It is, therefore, extremely concerning – and depressing – that the US National Academy of Sciences, no less, has recently published a report advocating a research programme to better understand the feasibility of interventions that seek to dim the sun. This unwelcome support has added wind to the sails of the Harvard research group promoting the plan, who are itching to fly an experiment called SCoPEx (Stratospheric Controlled Perturbation Experiment) on high altitude balloons above the pristine landscape of Arctic Sweden. The first experiment was planned for summer 2021 to test the balloon and instrument gondola – and followed, later in the year, by a flight that would release small volumes of sun-dimming aerosols. At the time of writing, the test flight has been suspended pending consultation with local Swedish and indigenous populations. The fact that such engagement has only followed public outcry says it all about the arrogant attitude of the tinkerers, and their willingness to ride roughshod over the wishes of others.

This local dispute points up one of the key issues associated with the embracing of intentional climate intervention. By what right does any one group, or one country, or one economic bloc, decide that it is OK to do this? Surely, no geoengineering scheme could be allowed to go ahead without – at the very least – the agreement of all nations. And even then, what about the legal and human rights of individuals? Do they count for nothing? The whole situation is a minefield, and one that is far better never ventured into. Almost certainly, it would be at least as difficult – if not more so – to achieve international consensus on a geoengineering plan as on an accord to slash greenhouse gas emissions in line with the science. Why then waste time, energy and money on something that does no more than address one of the symptoms of the climate crisis?

And, notwithstanding the associated risks and dangers, there are other reasons for kicking geoengineering into the long grass. It is often touted by its supporters as a 'Plan B', to be dusted off if and when Plan A (cutting emissions at a rate that circumvents catastrophic climate change) looks like failing. The problem with a Plan B, however, is that Plan A is no longer regarded as a last resort. In other words, the very existence of Plan B, detracts from the urgency with which Plan A needs to be enacted. If governments feel that a techno-fix is waiting in the wings, they are less likely to support those measures needed to slash emissions as the science demands, and more likely to champion net zero targets that are further in the future and require less effort or change to attain.

Reading Bill Gates's recent interventions on the climate crisis, it becomes apparent that what he means by 'avoiding a climate disaster' is knocking that pesky global heating on the head so that capitalism can keep moving forward in the fast lane - and so that, for example, he can keep criss-crossing the planet in his private jet. This is also how many of its supporters and advocates – not least the fossil fuel corporations – see geoengineering. Whether true or not, it seems to them to offer an opportunity to 'solve' the climate crisis without the wholesale reorganisation of society and economy that a rapid transition to a zero-carbon world would require. The bottom line, however, is that our planet is simply too small, too exploited and too damaged, to survive continued business as usual. So, if we want to save our world, and the people of it, we cannot afford to open the can of worms that is geoengineering. Instead of following what some like to think of as the easy road of the techno-fix, we must take the route that sees greenhouse gas emissions slashed and net zero carbon achieved, as soon as possible, not – as John F Kennedy said of the Moon landing programme – because it is easy, but because it is hard. And because it will change everything about our world for the better.

Bill McGuire is a Patron of SGR and Professor Emeritus of Geophysical & Climate Hazards at UCL. His new novel, Skyseed – an eco-thriller about geoengineering gone wrong – is published by The Book Guild. 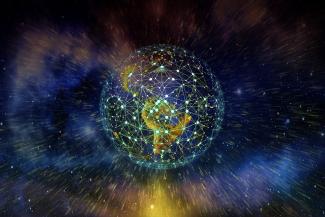