With nuclear issues leading the global political agenda, in an exclusive piece for the Responsible Science blog, based on his new book 'Fallout: A Journey Through the Nuclear Age, From the Atom Bomb to Radioactive Waste,' science writer Fred Pearce exposes the toxic and security risks of the UK’s growing 'Mt Plutonium' – 130 tons and rising of plutonium dioxide left behind by an energy technology that never took-off and is no longer wanted.

There is nowhere quite like it on Earth. Hidden away on the shore of West Cumbria sits the most concentrated collection of radioactive wastes anywhere on the planet. The site is well-known: Sellafield, the home of Britain’s original nuclear reactors for making the plutonium at the heart of our atomic weapons, and these days the place where most of Britain’s nuclear nasties end up. But its most lethal legacy is among its least-known.  It is a warehouse containing the world’s largest store of plutonium.

The deadly stockpile is not in some military bunker guarded by the fire-power of a military superpower, but in a warehouse guarded by Britain’s smallest police force, the Civil Nuclear Constabulary. Here, at last count, sits about 130 tons of powdered plutonium dioxide, sealed in thousands of stainless-steel cans, each about the size of a lunch box. It is enough to make 20,000 Nagasaki-size bombs.

This gigantic stockpile is the product of the chemical extraction of plutonium from the used nuclear fuel from Britain’s nuclear power stations. It continues to grow by about four tons a year, even though Britain has no use for this lethal by-product of the nuclear industry. Mount Plutonium is a product of collective delusion over many decades by politicians and nuclear engineers.

The delusion has been to believe that Britain was on the cusp of a future in which spent fuel from power stations could be recycled to create new fuel for new generations of power reactors. The government’s former chief scientist for energy David MacKay, who died in April 2016, once argued that this stockpile was a hugely valuable resource that could run the country’s electricity grid for 500 years. But with no sign of any investment to turn that dream into reality, the stockpile just sits there. This seems like madness to me.

Plutonium dioxide powder is not the purest form of plutonium. But the Royal Society, Britain’s most venerated science institution, warned in 2007 that the store was nonetheless a major security risk, vulnerable to terrorist attack. Terrorists might break in and steal some of the powder, which could quite easily be made into a crude nuclear device. Or they might simply launch some weapon into the building, which would blast the deadly powder into the air across northern England.

The author of that report, Geoffrey Boulton of Edinburgh University, says that a decade later the risk remains very real. The problems he identified had not been fixed, he told me when I met him a decade later in an upstairs room at the Royal Society’s palatial offices in central London.

Boulton is a geologist not given to hyperbole. But he was perplexed and angry that successive governments had largely ignored his report’s recommendations. He and his panel of five professors had set out an urgent programme for making the stockpile safer.  He had thought ministers would take the warning seriously.  Yet “the government has only delivered on one of our four immediate priorities,” he told me. Meanwhile, the presence in Europe of ever more terrorists made the risks of something bad happening to the stockpile ever greater.

The one advance made by the government since Boulton’s report has been to complete a new building to store the plutonium. Opened in 2010, it is 300 feet long and substantially larger than the Albert Hall.  Its managers insist it is secure, but they are reluctant even to identify the location of the building.  No doubt that is part of their security strategy. I won’t undermine it by identifying where the building is.  But if I can find out, then others can.  And the evidence of the past is that security may not be as good as they hope.

In 1995, some 200 Greenpeace supporters invaded Sellafield and leapt over the fence round the plutonium store, spraying the word “bollocks” on the wall. British Nuclear Fuels (BNFL), which ran the place at the time, claimed “there was no danger to the facilities”. But its company secretary until the previous year, Harold Bolter, later called that claim “asinine”.  How could there have been no danger, he said, when “a couple of hundred demonstrators, who might have been armed terrorists for all BNFL knew” had poured onto the site unimpeded and reached the plutonium store? Or when, as a Royal Commission report on the British nuclear industry had argued as long ago as 1976, “plutonium appears to offer unique and terrifying potential for threat and blackmail against society.”

Boulton told me he hoped the store’s managers had learned from the past and considered the risks posed by today’s generation of terrorists with today’s terrorist technology. “I assume that thought has been given to what a malicious individual might do to the store’s physical integrity – with a shoulder-mounted missile, or wearing a suicide vest without thought of their own survival,” he said. A successful small missile strike, he warned, “could project plutonium powder into the atmosphere, with the potential for widespread dispersal.”  It would be a terrorist Chernobyl. Did he know if the nuclear authorities had considered the matter seriously, I asked. Maybe they had, he said, but if they had found an answer to the threat, they hadn’t told him.

Boulton’s 2007 report set out four “immediate priorities” for defusing Britain’s plutonium time-bomb. The first, upgrading security, has arguably been achieved at the new store.  But he also called for a halt to further growth of the stockpile. Instead the stockpile has grown by a further 45 tons.  And he called for immediate work on turning the powder into mox fuel. He argued that even if mox fuel was never burned to make energy, the mixing would keep plutonium in a safer form than it is at present. Instead the planned mox fuel-making plant has been cancelled.

In truth, there has been no British conspiracy here. It is just an extraordinary, embarrassing, dangerous and expensive cock-up, arising from Britain’s thwarted ambition to turn spent fuel into a big new money-making industry. The stockpile has kept on growing because policymakers have been on autopilot. Nobody has called a halt to reprocessing to make more plutonium because nobody has wanted to admit that the world’s biggest stockpile of perhaps the world’s most dangerous element is useless.

Nothing that had happened since the publication of his report had changed his view that “the status quo of continuing to stockpile a very dangerous material is not an acceptable long-term option.” I have to agree.  Having spent several hours wandering around the perimeter of Sellafield, I don’t believe it would be too difficult for a terrorist either to identify where the plutonium is stored, or to aim a rocket at the stuff.

Fred Pearce is the author of Fallout: A Journey Through the Nuclear Age, From the Atom Bomb to Radioactive Waste, and environment consultant at New Scientist magazine.

Note: All sources in this article are from Fallout: A Journey Through the Nuclear Age, From the Atom Bomb to Radioactive Waste (2018) published by Beacon Press. 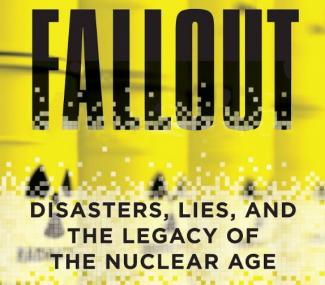