Dr Jan Maskell, SGR, describes the activities for young people which our organisation undertook as part of its first Science4Society Week in 2015 – and looks at what is planned for March 2016.

How do you get students interested in some of the ethical issues to do with science, design and technology? Our Science4Society Week aims to do this through a range of inspiring activities – and in our first year the focus was on secondary school pupils. We worked closely with teachers, especially at Dallam School in south Cumbria, to design a framework of activities which were then delivered to about 1,000 students during a week in late March 2015. We are planning to expand on these for March 2016.

A whole school framework of activities

Discussions about ‘ethical science’ covered what scientists do in their work and how values can influence this. Technology justice has been defined as where“everyone has the right to access the technologies they need to live the life they value, without limiting the ability of others now and in the future to do the same”. By breaking this definition down into different sections, students were able to deconstruct the ideas underpinning what, for many, is a novel concept. Students were asked to apply, and reflect on, some of these ideas during their science, design and technology classes during the week.

Year 7 and 8 pupils (ages 11 to 13) participated in three specially designed lessons to include a debate or discussion, a problem solving activity and a practical workshop. These aimed to appeal to different preferences for and approaches to learning and to build on the content and outcomes from each lesson.

The debate used a tried and tested process for a structured debate on a controversial topic, in this case: ‘Should all new mobile phones be taxed so they are at least twice their recommended price?’The different ‘rounds’ of the debate helped students think through the issues – such as environmental impacts – and reconsider their opinions. The structure also showed them how to think about different ethical points of view, build a discussion and back up their opinions with facts.How students’ opinions changed was recorded at the beginning, middle and end of the discussion – and it was possible to see that as a result of the discussion many pupils had changed their minds. One teacher commented about the debate, “I didn’t know what to expect – but they came up with some really good ideas!”

In the second lesson, after looking at different ways of generating renewable energy, small groups were asked to consider the variety of options available to the different communities living on a fictitious island. By assessing the potential generation options, the communities needs and the geographical features of the island, students were able to select the most appropriate technology. One teacher commented that these were “good resources and materials for students to consider”.

By way of contrast, the third lesson was a very practical one, with the task of designing a simple wind turbine capable of lifting a weighted cup off the floor – with the winning team being the one producing a machine that lifts the most weight. One teacher commented that the pupils “were excited by challenge” while another said “The construction phase was engaging and pupils worked well in small groups – suggesting ideas and listening to ideas of others.”

The outline of the whole school framework, as well as lesson plans, slides, video clips and resources were all made readily available and downloadable from the SGR website as a comprehensive package (see below). All of the activities are designed to integrate with the national curriculum.

As well as lessons during the normal school timetable, SGR helped school teachers and university lecturers organise visits for their students to locations where they could see in action examples of community-run renewable energy projects, super-insulated eco-homes, and innovative sharing schemes, such as cohousing and car clubs. “It was wonderful that they could see practical applications for solar, biomass and hydro power” said one teacher after a tour.

Science4Society Week was organised by SGR and, unlike many high-profile science education activities, it was not funded by any arms or fossil fuel corporations, just a group of charitable trusts.

Science4Society Week 2016 will run from 14th to 20th March. We plan to repeat all the activities described above, but also include a new competition to 'Design an Eco-Community' (deadline: 12th February) and training sessions for educators in late January and early February, in advance of the activity week. There will also be many more downloadable resources on a range of topics focusing on themes of energy, transport, buildings, food, healthcare, industry and water.

Dr Jan Maskell is SGR's vice-chair and co-ordinator of Science4Society Week. She is a chartered psychologist. 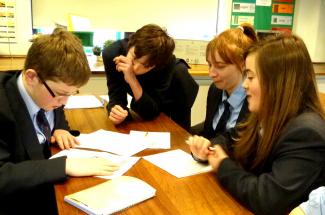