With the Royal Society holding a conference on green finance, Andrew Simms, SGR, looks at the gap between the institution's words and actions.

Scientists for Global Responsibility (SGR) welcomes The Royal Society’s July 2021 event looking at ‘bridging climate science and green finance’, but believes that Britain’s national science academy undermines its own point by continuing to hold investments in fossil fuels of at least £16 million.

SGR is calling on the UK’s science and technology professional bodies to show leadership on the climate emergency by aligning their actions with climate targets and dropping investments in, and sponsorship from, fossil fuels. Scientists and technologists are being invited to sign the SGR Science Oath for Climate.

The Royal Society event is a conference that set out to “explore opportunities and challenges to commercialising [low-carbon] technologies and potential solutions to channel the world’s finance into their widespread implementation”. But the Royal Society revealed that it holds investments of at least £16 million in fossil fuels and has not agreed to divest those funds.*

When SGR approached the Royal Society in early June 2021 regarding these investments, the Society did not commit to divesting its fossil fuel investments, but instead said it was awaiting the outcome of the Charity Commission’s consultation on its draft updated guidance on responsible investment. Other professional institutions, however, such as the British Psychological Society, Royal College of Physicians, British Medical Association, the Royal College of General Practitioners, the Faculty of Public Health, the Royal College of Emergency Medicine and the Royal College of Paediatrics and Child Health all felt able to commit to divesting or have already fully divested from fossil fuels. The Geological Society and Energy Institute tightened their policies to a degree on investing in fossil fuels, to exclude the worst carbon-emitting fossil fuels such as thermal coal and tar sands, and to press for alignment with Paris Goals, respectively, although they have much further to go.

The Royal Society conference website continued: “In June 2019, at least $30.7 trillion of funds were held in sustainable or green investments, an increase of 34% from 2016 according to a report by the Global Sustainable Investment Alliance. However, closer integration is needed between the physical and social sciences, financial professionals and institutions, innovative start-ups and global industry to support a low-carbon future.”

It would seem appropriate for the Royal Society to follow its own advice and support renewable energy technologies such as solar and wind by investing in them instead of non-sustainable investments in highly polluting fossil fuels.

Dr Stuart Parkinson, SGR's executive director, said: "We'd hoped an organization with this degree of influence and knowledge about the science of climate change would itself have altered course since its fossil fuel investments were revealed in 2019. Acknowledging the evidence behind the climate emergency and the urgency of the action means investing in a sustainable future for all of us. As the climate emergency worsens, the Royal Society sets a bad example by continuing to fund polluting and dangerous fossil fuel extraction."

SGR wrote to five professional science organisations – the Royal Society, Institute of Physics, Institute of Materials, Minerals and Mining (IOM3), Royal Meteorological Society and the Geological Society - regarding their investments in fossil fuels and arms as part of its Responsible Science campaign. The latest reports on the institutions, letters and any responses are available at the bottom of this page.

The Institute of Physics also invests in fossil fuels and told SGR that it is developing a clearer and more transparent ethical investments strategy, with no mention of the Charity Commission guidance. As mentioned above, the Geological Society recently introduced an investment policy that excludes the most carbon-emitting fossil fuels. The IOM3 effectively avoids the worst carbon-emitting fossil fuels through its investment in a fund that excludes thermal coal and tar sands, but does not have a responsible investment policy. The Royal Meteorological Society does not have a responsible investment policy, has little transparency regarding its investments and did not respond to SGR’s letter. (UPDATE 27.8.21 - The Royal Meteorological Society has now responded to SGR and has a policy of not investing in fossil fuels that SGR did not manage to find on the company's website.)

Andrew Simms is assistant director at SGR, as well as a co-founder of the New Weather Institute, a research associate at the Centre for Global Political Economy, University of Sussex, and a fellow of the New Economics Foundation. 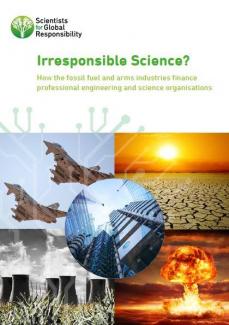