Dr Stuart Parkinson, SGR, looks at how the fossil fuel and arms industries finance professional engineering and science organisations - and the many issues this raises - in this summary of the new report, Irresponsible Science?

The new SGR report - Irresponsible Science? - reveals a previously unrecognised pattern of financial links between the fossil fuel and arms industries on the one hand, and some of the UK’s leading professional engineering and science organisations on the other. The links revealed include funding and branding of school education programmes, sponsorship of prestige conferences and dinners, investments, major donations, and corporate membership. The professional organisations that received the most significant funding from these controversial industries were the Royal Academy of Engineering, EngineeringUK and the Energy Institute.

You can read about further revelations made as a result of our report in the Sunday Times.

Some of the most influential professional engineering and science organisations are found to have prominently and, at times, preferentially promoted the fossil fuel and arms sectors. This is despite these industries having serious ethical shortcomings, such as failing to take the necessary scale of action to reduce carbon emissions or continuing to export weapons that fuel conflict and human rights abuses. Of most concern, some professional bodies promoted these industries to school children and other key audiences, but failed to discuss important ethical issues. Many invested large amounts in these companies, but did not acknowledge potential conflicts of interest. Most also failed to publish key financial data which would allow their members and others to hold them to account.

For ethical and reputational reasons, we argue that professional bodies should both be much more transparent about their income from corporations, and take major action to reduce and/or eliminate their financial links with the fossil fuel and arms industries. This would allow the professional organisations to properly fulfil their goal of providing responsible leadership for the science and engineering community, and help accelerate urgently needed action to tackle the enormous environmental and security problems currently facing the world.

Scope of the study

Professional engineering and science organisations (PESOs) – which include professional institutions and learned societies – play a very important role in modern society, setting standards of conduct and providing leadership for scientists and engineers. As such, PESOs help the world gain a wide range of important social and environmental benefits. Yet society is also facing enormous threats created by the irresponsible use of science and technology. These threats include the global climate and air pollution crises, as well as the resurgent nuclear arms race, increasingly brutal conventional wars fuelled by the international arms trade, and growing risks from cyber and robotic weapons. At the centre of these problems lie very powerful fossil fuel and arms corporations. Yet the financial and institutional links between these industries and PESOs have rarely been investigated in depth.

Our study seeks to fill this gap. We uncovered a wide range of financial relationships between PESOs and the fossil fuel and arms industries, and critically examined these links. To do this, we investigated a sample of 20 leading PESOs, all based in the UK, but many having international memberships. We focused on four main financial links – funding of school education programmes; investments; event sponsorship; and corporate membership schemes – as well as other areas in which we could find data. We also looked at relevant organisational policies, especially charters, mission statements, investment policies, and environmental statements. We used publicly available sources, such as annual reports, financial statements, and organisational websites. We found in many key areas that transparency was very poor, which was especially disappointing given that openness is a cornerstone of scientific work.

In more depth, the key findings of our study are as follows (with full references being available in the report).

Further detail is provided in the main report, with in-depth material given in a set of 20 case studies – one for each PESO.

In response to these findings we make a number of key recommendations, which are as follows:

1.      PESOs should be much more transparent about the extent of their financial links to controversial sectors, including the fossil fuel and arms industries, especially those related to school education programmes, investments and high prestige event sponsorship. This should include:

a.      Disclosing all payments from corporate sources worth over £1,000 for school education programmes and event sponsorship in annual accounts.

b.      Disclosing the specific investment funds in which all their assets are held.

c.       Proactively working with investment fund managers to increase the level of disclosure of individual companies in which their funds are invested.

3.      PESOs should end all branding of school education programmes (including teaching resources and in-school activities) by fossil fuel and arms corporations.

4.      PESOs should commission educational materials aimed at school-age children which discuss the ethical issues related to the exploitation of fossil fuels and the use of military technologies.

5.      PESOs should enact policies which restrict or eliminate financial links to fossil fuel corporations based on ethical criteria such as:

a.      The extent of the company’s involvement in high-carbon fuels such as coal, unconventional oil (e.g. oil sands) and unconventional gas (e.g. shale gas);

b.      The extent to which the company is reducing the share of fossil fuel exploitation within its activities;

c.       The extent to which the company is pursuing ‘Paris-compliant’ policies and practices.

d.      In defining and applying such policies, PESOs could make use of the sources provided in our main report in sections 2.2 and 3.3, and appendix 21.

6.      PESOs should enact policies which restrict or eliminate financial links to arms corporations based on ethical criteria such as:

a.      The extent of its sales of military equipment to Human Rights Priority Countries;

b.      The extent of its involvement in nuclear weapons development, manufacture or deployment;

c.       The extent of its involvement in military artificial intelligence programmes which could accelerate the development of lethal autonomous weapons.

d.      In defining and applying such policies, PESOs could make use of the sources provided in our main report in sections 2.3 and 3.3, and appendix 21.

7.      PESOs should enact policies which eliminate financial links to all corporations which have received significant penalties in the last five years related to law-breaking or major malpractice.

8.      PESOs should commission briefing materials and/or courses for their professional members on the relevance of climate change and peace-building to their work, if they have not done so already.

9.      PESOs should agree and implement environmental policies and practices which aim to minimise the impacts of both the organisation itself and its professional members, if they have not done so already.

a.      PESOs should make use of best practice environmental management systems, such as ISO 14001, net zero carbon targets, and independent monitoring and verification. 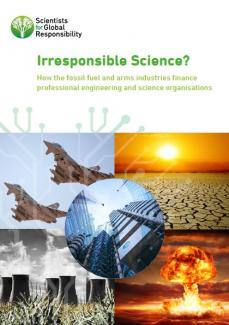