Skip to main content
More Soldiers in the Laboratory

This report provides an update to Soldiers in the Laboratory (published in 2007). In addition to SGR's latest findings about the power and influence of the military in science, engineering and technology (SET) in the UK since the early 1990s, the report also highlights some of the problems encountered in obtaining detailed information on military involvement in R&D despite the entry into force of the Freedom of Information Act 2000. The report also argues that resources would be better directed towards supporting social justice and environmental protection, rather than towards the military. 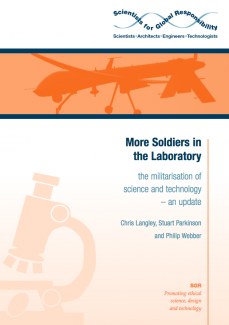