The role of science and technology in UK security strategies

UK government funding of military research and development (R&D) has long been among the highest in the world. However, there has been very limited publicly available information on what the UK taxpayer is actually funding, or analysis of what alternatives might be better for our security. This report reveals new data on the billions spent on continuing to develop Cold War-style weaponry that is not relevant to the UK’s current security threats, as well as exposing the failure of government departments to account properly for hundreds of millions of pounds. The report compares military R&D spending with R&D focused on understanding and tackling the roots of conflict and the longer term security threats that we face from climate change, resource scarcity and other global problems.

The authors argue that security-related R&D should be based on a radical rethink of UK defence and security policy, which the current government acknowledges in theory but ignores in practice. The report addresses the arguments surrounding defence reform and spending that will be at the heart of the security debate for the next decade, and challenges accepted ways of thinking about defence and security across the political spectrum.

Produced as part of SGR's Military influence on science and technology programme. 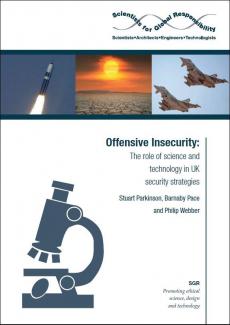