Skip to main content
Bio-methane: a sustainable future for gas?

With a UK moratorium on fracking, attention is at last turning to alternative sources of methane. Wiebina Heesterman outlines the science and technology of anaerobic digestion, while Stuart Parkinson gives a brief overview of the potential of bio-methane to meet UK demand for gas. 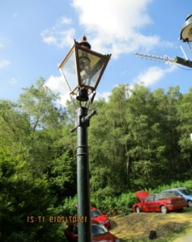 High on the Malvern Hills in central England stands a street lamp, powered by dog poo (see left). It is an area favoured by walkers, many of whom bring their four-footed companions. Actually, it is the methane obtained from the dog waste that fuels the light.

Any organic material can be turned into methane by the action of microbes. If all discarded food waste were to be used as feedstock for the anaerobic digestion (AD) process, hopefully sufficient methane would be generated in the UK to make the resumption of fracking unnecessary. This latter process is rightly condemned as wreaking havoc on people’s living space and the environment in general, while reportedly leading to large methane leaks. [1]  As methane is a potent greenhouse gas, as well as being highly flammable, minimisation of such leaks is essential. 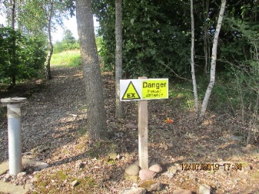 Many facilities already utilise methane derived from organic waste. Instead of needlessly and dangerously venting from landfill (as shown in the picture, left), bio-methane is being used to drive buses, heat homes and provide power for all kinds of activities.

Generation of gas by AD is an old technology, forgotten and long regarded as obsolete because of the availability of cheap fossil gas. However, in recent years the situation has reversed. By late 2019, 102 digesters out of 661 in the UK were equipped to refine biogas generated from organic waste into methane suitable for injection into the national gas grid – a more than 13-fold rise from 2017. [2]  As to the future of AD, corporate members of the World Biogas Association have expressed their commitment to reduce global carbon emissions by 12%. According to a report from the Anaerobic Digestion and Bioresources Association (ADBA), UK emissions have fallen by 1% because of the activities of the AD sector, and the association estimates that given government support a further 5% by 2030 would be achievable. [3]

Bio-methane is widely used in transport, especially in Sweden where a train and well over 38,000 other vehicles run on bio-methane. [4]  Bristol too has its methane buses.

The range of potential feedstock is vast. Farm waste was the first substance to be subjected to the digester treatment. Soon many sewage companies began to make use of bio-digestion to fuel their operations and sell the left-over methane to the grid. All kinds of food waste, even rather unexpected liquids such as whey and ice cream residue, are being used as input. To date just 50 local authorities in the UK include kitchen waste in the weekly refuse collection as well as green waste, which tends to be composted rather than given the AD treatment. So far local authorities are reluctant to include pet poo in their regular collections because of potential parasite contamination. Nevertheless, a Canadian town is able to power 13 homes with it, collected separately from receptacles in local parks.

How does AD work?

After an initial stirring to remove any contaminants, the mixture of organic waste is decanted into an oxygen-excluding digester vessel. Then it is heated to a temperature of 30 to 50°C, and sometimes higher. The real work is done by microbes, generally part of the original input, although others may be added to speed the process. [5]

These microbes consist of bacteria and archaea: both unicellular microbes lacking a nucleus. [6]  Archaea differ in that they are able to thrive in extreme temperatures [7] and conditions of high acidity and salinity.

There are four stages to the process of generating biogas: [8]

The result is a mixture of methane (50 to 75%), [9] carbon dioxide, water vapour and pollutants such as ammonia and hydrogen sulphide (H2S). Biogas may be used to provide combined heat and power for inclusion in the electricity grid or to manufacture power cells.

Further treatment is necessary to separate the constituent parts of the biogas to produce methane for injection into the gas grid. The International Energy Agency (IEA) describes different methods. [10]  In essence it involves the use of mechanical means to remove any impurities, such as the carbon dioxide, which may still be put to some use or sequestered underground. [11]  In the end a solid residue is left, the digestate, which is in high demand as an organic fertilizer.

One energy provider intends to provide ‘green gas’, [12] generated from grass clippings from clover-rich meadows. As these will be rotated with fields sown with food crops, it results in the stimulation of food production as well as providing energy. Similarly, making use of grass for AD, cut from roadside verges once wildflower seed has been allowed to disperse, [13] serves to enhance biodiversity.

The advantage of transforming waste into energy, is patently obvious: replacement of fossil fuels as well as the reduction of the energy footprint of waste treatment plants, thereby forming an important part of a zero-waste initiative. Regrettably several European AD plants still run on specially grown energy crops, a fact that gives the term ‘biofuel’ a bad press. Fortunately measures to restrict the practice are being introduced. [14]  We might wonder whether composting food waste and using roadside hay cuttings to restore wildflower meadows [15] could be preferable to converting them to fuel?  But why not do both? Personally, I’m infinitely cheered by the thought that my shower is being powered by grass clippings when my solar thermal panel doesn’t oblige.

Dr Wiebina Heesterman is co-author of the book Rediscovering Sustainability: Economics of the Finite Earth and has written widely on environmental issues.

The potential for bio-methane

Bio-methane – derived from anaerobic digestion of organic waste and processed as described in the main article – has a very large potential as a fuel for power stations, homes and businesses in the UK. For example, a 2017 industry study concluded that enough biogas could been generated potentially to heat 15 million homes. [16]  The energy company Ecotricity estimated a similar potential from digesters fed only by sustainably-harvested grass cuttings. [17]  Approaching the issue from a different direction, Professor Keith Barnham, Imperial College London, argued that simply using the bio-methane that could be produced from the 200 tonnes of food wasted in the UK each year due to inadequate refrigeration would be enough to back up a UK electricity grid otherwise supplied by wind and solar power. [18]

Some large-scale scenarios, however, rely on the use of energy crops and there are potential land-use conflicts with food crops and wildlife habitats. A key solution here is to rotate food crops with clover and/or grass. Then, for example, the grass cuttings can be fed into a digester and the solid by-product be returned to the land as fertiliser for the next season’s food crops. [19]  A similar rationale applies to grass cut from roadside verges after wildflowers have been allowed to set seed. [20]

Dr Stuart Parkinson is Executive Director of SGR, and has written widely on energy and environmental issues.

[18] Barnham K (2019) The environmental and economic case against fracking & comparison with a safer, cheaper and environmentally friendlier alternative. Submission to NAO investigation into shale gas.