It can seem odd that a refusal to act is a good way to motivate action, writes Andrew Simms, of Scientists for Global Responsibility. It appears even stranger when that refusal to act comes at a cost to the ‘refuser’, such as your own education. But striking has been a tool of change for most of recorded history for good reasons, and often at great cost to those taking action.

A movement of millions of school age climate strikers has grown in just the last year to challenge governments to change direction.

If you are powerless directly to take decisions, and have exhausted all other ways of trying to push for change, withdrawing your consent, participation or labour is a powerful act of last resort.

But now there’s a kind of strike that is distinct and different, in nature and scale.

A movement of millions of school age climate strikers has grown in just the last year to challenge governments and older generations to change direction.

A quarter of a century since the UN’s convention on climate change (UNFCCC) was agreed at the Earth Summit in 1992, instead of charting a new course to avoid climate breakdown, globally we are accelerating towards it.

This summer Greenland appeared to lose more ice in a single month than the average annual loss from 2002 up till now.

The concentration of the greenhouse gases in the atmosphere, largely released by humanity’s burning of coal, oil and gas, rose steeply over 2018-2019 for the seventh consecutive year, to the highest level for around 3 million years, and the highest yet experienced by human civilisation. The rate of rise too has increased, with last year being the second highest rate of rise in six decades. Record breaking extreme weather events abound from hurricanes to uncontrollable forest fires.  This summer Greenland appeared to lose more ice in a single month than the average annual loss from 2002 up till now. Britain’s former chief scientific advisor, David King, called the faster pace of climate breakdown 'scary'.

Quite reasonably, an emerging generation might expect those in control and taking decisions to act in the public, and the biosphere’s, interest and take urgent action. We’re taught from the earliest stages of life about how to ‘stay safe’. In playgrounds, crossing roads, near water or drugs, or among strangers in public places, the constant exhortation of the older generation to the younger is to take care and keep away from danger.

It must seem absolutely bizarre that where the biosphere is concerned, something which provides our fundamental life support system, the message is the opposite – a kind of ‘let’s light it, burn it, and see what happens.’

In the UK alone, which has cultivated an international reputation for leading on climate action, recent policy choices have been the climate equivalent of sending children out to play in traffic.

The UK already accounts for a staggering one in twelve of all flights taken globally, with 70 per cent of flights being taken by frequent flyers who make up just 15 per cent of the population. But plans to expand the UK’s main airport, Heathrow, could wreck plans to hit a zero carbon target. The government is also committed to expanding the highly polluting process of fracking, and fully draining the North Sea oil and gas fields, in spite of estimates that show most known fossil fuel reserves are unsafe to burn.

And, while onshore wind is the UK’s cheapest and most popular clean, renewable energy source, restrictive planning conditions and rules blocking mainland wind projects from government contracts in subsidy auctions are effectively killing any developments. Similarly, after a period of impressive expansion, the government suddenly cut support for solar power leading to the sector going into decline. Plans for zero carbon homes have been dropped and there are still a wide range of subsidies handed out to dirty fossil fuels.

It must seem absolutely bizarre that where the biosphere is concerned, the message is the opposite to 'stay safe' – a kind of ‘let’s light it, smoke it, and see what happens'.

If you want a future and can’t yet vote, what else is a younger generation supposed to do to get its voice heard other than strike?

So far, the schools strikes have been creative and inspired people of all ages to action, not to mention giving renewed hope and vigour to the tired many who have campaigned for decades for action on the climate crisis. But still there has been no response in terms of the scale and speed of action needed, so the ambition of the strikes is growing, going truly global and calling on people of all ages to take part.

Of course, it’s not just about striking, the strikes are also backing calls for a Green New Deal. And, there is now a Green New Deal Bill before Parliament that calls for a rapid programme of decarbonisation and the reversal of inequality in the UK, between now and 2030. So now we have something to fight against, and something to fight for, a zero carbon, more equal economy.

In the UK alone recent policies have been the climate equivalent of sending children out to play in traffic.

Other campaign tactics haven’t worked. So now we have the school strikes. The right to strike is part of a fully functioning democracy, and something is needed to push through change when, as now, systems become entrenched and inertia prevents progress.

It’s logical too. Going on strike is one of the few choices available to people who are distant from decision-making and appear powerless. Greta Thunberg puts it unambiguously, "We are fighting for our lives". The school strikers have already transformed global awareness of the climate emergency. As scientists and engineers, SGR stands in solidarity with them, as we all should. Then we should get to work to make sure that a Green New Deal becomes law so that we all have a future to look forward to.

Andrew Simms is Assistant Director of Scientists for Global Responsibility. 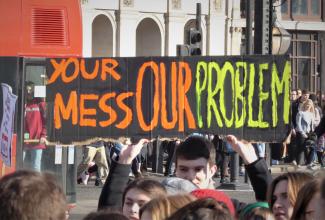