Skip to main content
Do You Know The Agenda Behind Your School’s STEM Provision?

The arms industries and the armed forces are putting large sums of money into the UK education system, including providing science education material for schools. But there are alternatives - such as SGR's Science4Society Week.

Children today inherit a world beset with insecurity. Huge losses of biodiversity and major erosion of soils are jeopardising food supplies. Severe weather events and sea level rise, due to global climate change, have already begun to devastate lives; and antimicrobial resistance is spreading. Meanwhile, the threat from nuclear weapons is ever-present, and economic inequality and violent conflict continue to be key contributors to global instability.

While we humans are responsible for many of the threats we face, we also hold the answers. The education system through which children begin to gain the skills, knowledge and willpower to deal with these threats is in many ways the custodian of the future. In British Science Week 2017, it is apt that we are alerted to the role of science and technology as among the most positive forces for change at humanity’s disposal. The priorities and resources of these fields are a determining factor in the health and the survival of the world’s species including our own.

Yet in British schools, Science Technology Engineering and Maths (STEM) learning and STEM careers advice are influenced by and weighted towards industries with agendas and outputs that contribute to some of the very threats the STEM community must answer.

The military and arms industries are putting large sums of money into our education system and into STEM educational material for schools. STEM activities are delivered by various parts of the armed forces, and schools are encouraged to participate in military and arms focused STEM activities through schemes such as the Big Bang Fair and BAE Systems’ ‘Education Roadshow‘ (run in conjunction with the RAF and Royal Navy). The Ministry of Defence are also developing partnership memorandums of understanding with a range of other STEM providers. In Yemen, a young woman hopes to become an engineer in order to help rebuild her country. Meanwhile in Britain, BAE Systems, which manufactures weapons used to destroy her country, works with the military to advertise STEM careers to school children.

Given the recruitment and marketing agenda of military STEM programmes, this exposure to military images and references to military technologies is often given in a sanitised manner. This encourages unquestioning support of British military interventions and is part of a wider integration of military-led activities into national education policy that has gone virtually unquestioned.

STEM teaching includes developing skills of observation, evidence gathering, drawing conclusions from facts, critical analysis, verification and testing. These skills are recognised as useful in many other subjects; as higher level study skills and for contribution to wider society. Should we not therefore be concerned that a one-sided view of military and arms company activities, can undermine these skills?

If science and technology can play an essential role in protecting the global ecology on which we rely, in safeguarding public health, and holding major corporations and governments to account for destructive activities, should this not be reflected in STEM activities and external provision?

Raising young people’s awareness about the innovative use of science and technology in such things as conservation and healthcare, and the generation of energy from renewable sources, can both engage and inspire.

So why does the government not provide similar levels of funding to civilian services (such as the Fire and Health Services, conservation and care work), to produce STEM related materials whilst also teaching about team work, dedication and service? CC by 2.0 image courtesy of Rob Deutscher on Flickr

The importance of STEM learning as a positive force for humanity is well recognized by Scientists for Global Responsibility. In parallel with British Science Week, they run ‘Science4Society‘ Week, this year from 13-19th March. This promotes STEM resources with a focus on science, design and technology which contribute to peace, social justice and environmental sustainability.

This includes national competitions, free downloadable lesson plans, discussions, and practical and problem solving activities. Lessons include debates on current issues, giving students the opportunity to make up their own minds. Children are given the chance to apply their scientific knowledge and thinking skills to practical situations, for example choosing energy options.

The Science4Society project was set up to provide an alternative to STEM school activities funded (wholly or partly) by the arms, military and fossil fuel industries. This is a small-scale effort compared to the education initiatives funded by the government on behalf of the military. So, if we take seriously the powerful role of science and technology in shaping our future, it behoves educators, parents and guardians to champion Science4Society Week in schools themselves.

Does your school take part in Science4Society Week? And does STEM learning there reflect the valuable thinking skills young people should develop, and the just and sustainable world we wish to see? 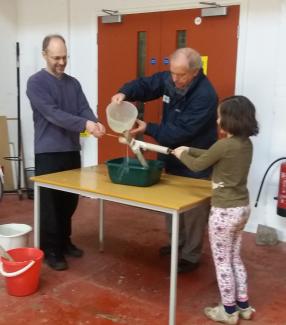 Issues
Security and disarmament
Who controls science and technology?
Types
Other documents