North Sea oil began flowing into the UK economy in 1975 and production peaked in 1999. Ever since, the industry has faced inevitable decline. Now, writes Andrew Simms, a new report [1] reveals how decommissioning its infrastructure is raising questions of cost, contradictions in climate and energy policy, and the prospect of a huge bill being passed on to the next generation.

In June 2017, the Oil & Gas Authority (OGA), the regulator created for the industry which is mostly centred on the UK’s continental shelf oil and gas fields (UKCS), published an estimate for what it will cost to decommission the sector in its twilight years. It was presented as a range, with the most likely amount given as a little short of £60 billion (£59.7 bn at 2016 prices) to decommission all the existing and proposed infrastructure, over a non-specified period. This would remove over 250 fixed installations, a similar number of subsea production systems, over 3,000 pipelines and about 5,000 wells. [2] There is strong pressure to delay decommissioning as its high costs undermine profitability.

This cost figure was the highest estimate yet, and a wake-up call for an intergenerational burden being passed to young people in the UK. Unlike other oil and gas producing countries such as Norway, UK governments have not prudently managed and saved the proceeds from the industry in a sovereign wealth fund. Norway’s fund recently surpassed $1 trillion, worth nearly $200k for every Norwegian citizen. [3] By contrast, in 2016, the UK industry became a net drain on public resources. A mild recovery was quickly followed in the 2017 budget with lower forecast revenue, and more tax breaks announced. In the future, the oil and gas sector looks set to be a burden to a younger generation who received no direct benefit from it. According to the new report Rigged: How the UK oil and gas industry is undermining future generations, there are also reasons to believe that even the OGA’s new high estimate of decommissioning costs is an underestimate.  But this, too, is just a small part of the UK oil and gas sector’s intergenerational burden, whose full costs go largely unaccounted for. The policy framework put in place to manage the industry’s decline seems designed, perversely, to maximise the intergenerational burden, with an indulgent tax regime, and a focus on maximising the extraction and use of fossil fuels that carry critically high health and environmental costs, which in turn disproportionately hit younger people.

The report finds that the OGA’s estimate for the cost of decommissioning is flawed in ways which point towards the real costs being higher. Their estimate appears even to contradict their own research on the actual performance of the industry in the field.

The estimate is their so-called ‘P50 target’, which means that there is a 50:50 chance of the costs being higher than that. [4] It assumes that additional cost savings of 35 per cent should be ‘easily attainable’ – producing an official target cost of £39 billion - when in fact its own review of UK oil and gas projects between 2011-2016 found an average overspend of 35 per cent against estimates. This figure, too, emerges in other assessments as a global average overspend for mega-projects in the power sector, seriously questioning the OGA’s target estimate making the more probable cost (excluding health and environmental costs) closer to £80 billion.

North Sea decommissioning is considered a more difficult task than in fields like the Gulf of Mexico, where it is more advanced, and where decommissioning has had to happen faster than expected, partly due to extreme weather events.  The OGA’s exercise is treated as immune to any ‘events’, assuming none will happen. Other studies of actual decommissioning projects reveal there to be cost overruns compared to estimates of between 30 and 100 per cent. [5]

Against the riskiest, and dominant type of project cost estimate – so called ‘Class 5’ – which carry the least information and about which the least is known, the OGA makes a ‘judgement,’ without elaborating on why, to include only half the recommended contingency. Also, there is no policy to govern what happens if one of the companies responsible for decommissioning, and which jointly owns pipelines or terminals, goes bankrupt or refuses for some other reason to play their part. [6]

The OGA’s cost estimates are still equal to between four and eight decades’ worth of current tax income from the sector, or between two and four decades if, as expected, the public meets half the cost. There is a central contradiction that decommissioning is necessary because of the Paris climate agreement which the UK has ratified – yet UK policy deems decommissioning must be paid for by the continued exploitation of the oilfields. Young people are particularly vulnerable to the air pollution that results significantly from the burning of fossil fuels. The UK’s annual health bill related to air pollution is estimated at £20 billion, or more than two decades worth of current tax income from the oil and gas sector.

A tax regime designed to curtail fossil fuels and promote clean renewable energy could save four out of every ten lives lost prematurely to air pollution. Internationally, 90 million lives could be saved between 2017 and 2050 with rapid switch to renewables. [7]

If the industry actually met its full carbon costs, in terms of the environmental and health impacts passed on to the rest of the economy and society, it would to all intents and purposes be bankrupt. The carbon cost of a single year’s worth of production from the main, Scottish North Sea fields in 2016-17 comes in somewhere between $8.3 billion to $49.3 billion, depending on which estimate for the costs of carbon is used (the range for the UK as a whole would be and $10.1bn - $60.1bn).

Maximising North Sea extraction, in part to pay the costs of decommissioning – running faster to stand still – simply creates a larger burden for future generations, given the health and environmental costs of oil and gas. There is also an opportunity cost to public subsidy towards oil and gas, because such subsidies create a bias of five to one in the support public finances give to fossil fuels compared to renewables.

Because of these contradictions, argues the report, the UK oil and gas industry is undermining young and future generations. Its impact goes largely unaccounted meaning it is hard to judge precisely by how much. It survives through the indulgence of a protective policy duvet, plus both direct and indirect public and environmental subsidies. If properly accounted for, with full responsibility for its product – the bills for decommissioning, health and environment – the industry would probably be bankrupt. The next generation is expected to prop up an uneconomic industry in order to clear up its own mess. The report calls for a new intergenerational deal and policy framework - a ‘sunset, sunrise’ contract. This would oversee the managed closure of systems which have run out of economic usefulness and environmental space, and which allow for the growth and substitution of a renewable energy framework to provide better health, more jobs, a safer environment and long-term economic prospects for young people and future generations.

Andrew Simms is co-director of the New Weather Institute, and assistant director of SGR. He is the co-author with David Boyle of Rigged: how the UK oil and gas industry is undermining future generations (2018) 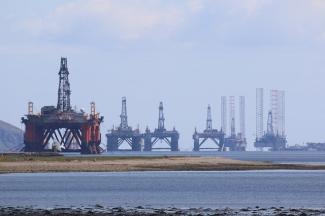