Donald Trump and Kim Jong-Un have reminded many of the risks of nuclear conflict, but have we forgotten the dangers of simply owning the weapons? David Cullen and Peter Burt, Nuclear Information Service, summarise a recent report on the frightening scale of accidents within Britain’s military nuclear complex - and the shocking reality that the full extent of the problem can’t be known because no central record has been kept.

In the era of Donald Trump and Kim Jong-Un there is a growing public awareness of the risks of nuclear weapons. Many fear that the escalating war of words could result in one side or other using nuclear weapons, either in a planned first strike or as a result of a misunderstanding about the other side’s intentions, with catastrophic consequences.

However, there is one aspect that is often overlooked in the debate over the risks of nuclear weapons: the inherent risks that arise from simply possessing them, even if nobody ever intends to use them. No system is ever perfect, equipment becomes less reliable over time, and human error is a fact of life. These factors do suggest that even in peace-time, nuclear weapons are a risk to the public, but how large is that risk?

In the UK the Ministry of Defence has only ever published one official list of nuclear accidents in this country. Deposited in the House of Commons library in 2003 after a six-year campaign by The Guardian newspaper it detailed 27 incidents. However, this is far from being a complete list. The truth is that nobody really knows how many accidents and near misses there have been. There is no central record of incidents, and records prior to 1960 are particularly patchy.

Earlier this year the Nuclear Information Service (NIS) published a report compiling all of the known accidents, near misses and dangerous occurrences in the 65-year history of the UK’s nuclear weapons programme. Playing with Fire: Nuclear Weapons Incidents and Accidents in the United Kingdom [1] lists 110 serious incidents as well as numerous other less serious incidents.

The report looks at the different stages in the production and deployment of nuclear weapons, with different chapters on manufacturing, transport, handling, and deployment on submarines, aircraft and ships. There are also separate chapters dealing with security incidents and accidents involving US nuclear weapons stationed on UK territory. Each chapter lists all of the known incidents and concludes with a detailed case study of one of the more serious incidents.

Main findings of the report

Among the serious incidents in the report are 27 fires and eight explosions, six aircraft crashes and six incidents involving a problem with a nuclear reactor. There were also 12 incidents where a nuclear weapon was damaged and seven where there was some risk of an unintended nuclear detonation.

There were several incidents that resulted in deaths. Seven workers have died at AWE Aldermaston in industrial accidents over the years, and a further nine are thought to have died due to exposure to radioactive material during their time working there. There have been no industrial deaths since 1986 and health protection standards at AWE are considerably better than they used to be, but it is a strange irony that the primary victims of the UK’s nuclear weapons are the people who built them.

The most lethal incident listed in the report is the Windscale fire in 1957. The reactor where the fire occurred was part of the nuclear weapons production process – producing plutonium and other radioactive elements for nuclear warheads. In fact, the rush to produce the required materials probably contributed to the disaster. While it is not possible to directly assess the links between radiation exposure and its stochastic effects, such as cancer, [2] an editorial in the Journal of Radiological Protection estimated that the radioactive release from the fire will have caused around 100 deaths from cancer.

There is a wide degree of variation in the amount of information in the public domain about the different incidents in the report. Some are extensively documented, like the Windscale Fire, but others do not appear to have any extant records and we only know about them from passing references in other documents, such as memoirs.

The UK government’s policy on refusing to confirm or deny whether nuclear weapons were deployed on a particular surface ship and a lack of archive evidence mean that there are some very serious incidents involving nuclear-capable ships where we cannot be certain if nuclear weapons were on board at the time. These include fires and collisions with other ships.

There is documentary evidence that nuclear weapons were on ships during some incidents, for example during a collision that occurred in Hong Kong harbour in 1988 and on the flotilla dispatched to the Falkland Islands in 1982. In the latter case, the decision not to remove the weapons meant that over 65% of the UK’s stock of nuclear depth charges went into war in the South Atlantic. As a consequence, they then had to be shuttled between ships in international waters in order to comply with the South American Nuclear Weapons Free Zone. This operation was done with rope and pulley system known as a ‘heavy jackstay’ and resulted in “significant damage” to the casing of one warhead.

The West Dean incident occurred on a wintry day in January 1987 when an RAF nuclear weapons convoy was moving WE177A tactical nuclear weapons from Portsmouth Naval Base to the Royal Naval Armaments Depot at Dean Hill.

The convoy was moving down a narrow country lane on the final stage of its journey when a car approaching from the opposite direction stopped to let the heavy lorries pass. As the third carrier approached the car, the driver lost control and a combination of icy road conditions and the road camber caused it to slide off the road. The verge gave way and the carrier toppled to its left, coming to a halt on its side in a field three feet below the level of the road. The fourth warhead carrier in the convoy slewed across the road on the ice as the driver braked and came to rest precariously balanced on the verge, with its front wheels off the road.

A security cordon was placed around the site, but this was quickly infiltrated by protestors who had been monitoring the convoy. The convoy crew alerted the civilian emergency services and experts from the Atomic Weapons Research Establishment (AWRE) were called out to advise on whether the stricken trucks could be moved safely.

The fourth truck, still on the roadway, was winched back on to the road and was able to move away under its own power but the vehicle which had fallen into the field could not be moved until the following morning. At first light the truck was righted and lifted back onto the road by a 50 ton crane and then, 18 hours after the accident, it was towed into the Dean Hill base under heavy military escort with helicopters hovering overhead.

Documents subsequently released by the MoD under the Freedom of Information Act revealed that the convoy had been transporting six WE177A nuclear weapons and that each of the two trucks involved in the crash had been carrying two warheads. The four weapons involved in the accident were inspected over the next few days at the Dean Hill base by personnel from AWRE and the Royal Aircraft Establishment and were deemed to be “safe for movement and storage in the magazines”, although as two of them were approaching their refurbishment date, “it would be prudent to refurbish prior to Service return”.

On the 2 May 1984 a Hercules transport aircraft landed at RAF Bruggen in West Germany. The Hercules was on a ‘routine logistical flight’ to deliver a cargo of WE177 nuclear bombs from the UK to Bruggen. The bombs were unloaded from the aircraft later that evening and moved to the ‘Special Storage Area’ (SSA) at the base – the high security area where nuclear weapons were stored.

During the unloading job one of the WE177 bombs was loaded onto a flat top trailer towed by a Landrover to be driven to a storage building. As the Landrover turned a corner on its way to the bomb store the container holding the bomb “slid from the trailer; fell some 3.5 feet, and slid about 20 feet, coming to rest after rolling through 270 degrees”. The container was recovered and moved into a servicing building where the bomb inside it was inspected. An impact mark three inches long was discovered on the body of the bomb, corresponding to damage to a tool box mounted inside the container. At this point the RAF decided that the weapon was unserviceable and called in experts from AWRE for advice. “They flew in a Hercules with a special decontamination unit and cordoned the whole area off”, said one RAF mechanic who was serving at Bruggen at the time of the incident.

The AWRE response team took a series of radiographic images to examine the interior of the warhead, revealing a “crack-like feature” in the warhead's high explosive assembly. However, it was eventually concluded that the feature corresponded with an abutment where three explosive tile edges met and was quite normal. After three weeks of investigations the AWRE team concluded that the bomb was safe to move by normal means and it was returned to the UK for servicing.

A Board of Inquiry found that, contrary to regulations, the container had not been secured to the trailer before it was moved by the Landrover. Unsecured containers “were being moved regularly” within the Special Storage Area where nuclear weapons were stored, and personnel working in the storage area had not brought this to the attention of a higher authority. The engineering squadron responsible for explosives storage was understaffed and the practice of moving unsecured containers had been “accepted by the SSA staff as common practice for some considerable time”.

The inquiry found that non-compliance with regulations directing the transport of nuclear weapons had been “directly and wholly responsible” for the damage to the bomb, and concluded that seven RAF personnel, including two officers, had been negligent in their duties. These officers knew that rules were being broken but failed to report the effects that lack of staff and equipment were having on compliance with safety procedures or to provide adequate supervision. Both were subsequently removed from their posts.

The picture built up from these examples, and from the others in the report, is that it is not possible to eliminate accidents altogether. Problems and sloppy behaviour will eventually creep in at some point, equipment will break or some unforeseen circumstance will cause unforeseen difficulties. While changes such as putting the defence nuclear programme under external regulation would help to reduce the risks of an accident involving nuclear weapons, it will not be possible to eliminate the risks altogether while nuclear weapons still exist.

David Cullen is Research Manager of the Nuclear Information Service. Peter Burt is the author of Playing with Fire.

2. Stochastic effects are where the incidence of illness occurs by chance, without necessarily having a threshold level of dose, and where the probability of effects is proportional to dose but severity is independent of it. 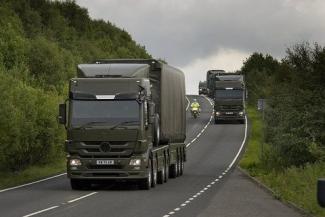