Scientists for Global Responsibility (SGR)’s “Science oath for the climate” now has more than 100 signatories following its launch on November 7th 2020.

The oath is about both individual behaviour and system change and is designed for scientists, engineers and academics. By signing they demonstrate their commitment to speaking out about the scale of the threat shown by the scientific evidence, and the consequent speed and scope of necessary action - despite the often politically challenging conclusions that they lead to. In order to show leadership, signatories pledge to take action to reduce their own personal emissions and to lobby their professional associations and employers to align themselves to pathways compliant with the Paris 1.5°C pathway.

“Experts working on the climate emergency should not have to look over their shoulders when describing its seriousness, and they should feel free to speak out about unrealistic technological fixes, inadequate policies or things likely to make the problem worse. Signing the oath is a public commitment to stand together in public and represent the full implications of the science without fear,” says Andrew Simms, SGR assistant director.

SGR’s concern is that there has been self-censorship in the climate community, with some things said in private that are not said in public. These include, for example, concerns about the practicality of proposed technical solutions such as rapid, large-scale implementation of bioenergy carbon capture and storage (BECCS)), and the need for stronger efforts in the policy and economic realm related to behaviour change by the wealthier groups in society. We are troubled that not enough is being said in public about climate scientists’ private concerns.

With the UN, UK and France co-hosting a Climate Ambition Summit on December 12th to mark the fifth anniversary of the adoption of the Paris Agreement, it’s vital that scientists continue to show their support for the necessary action to meet the Paris targets. The UK will host the international COP26 climate negotiations in November 2021, a year later than planned due to the coronavirus.

The climate oath initiative stems from SGR’s report on 'Scientists Behaving Responsibly: Should science walk the talk on climate breakdown?', which highlighted the potential of scientists and engineers to act as role models for behaviour change and voices calling for system change in their sectors, and the SGR 'Irresponsible Science?' report on the environmental track records of the professional scientific and engineering associations. 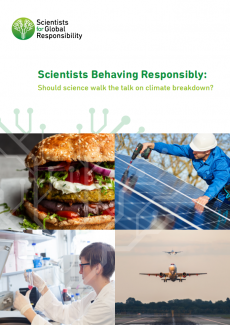