With a new government in power and a new international call for action on energy research from the Global Apollo Programme, Dr Stuart Parkinson, SGR, assesses whether the UK’s energy R&D is heading in the right direction. One question, in particular, is whether nuclear R&D or renewables R&D should be prioritised.

The launch of the Global Apollo Programme, which aims to convince governments across the world to markedly increase spending on energy research and development to tackle climate change, is welcome. With a new Conservative government in power here in the UK, and important decisions about our energy policy starting to be made, now is an important time to consider whether energy R&D in this country is heading in the right direction.

The UK government used to spend a lot of money on energy research, development and demonstration projects (RDD)1 – as shown by 40 years of data from the International Energy Agency in figure 1 below. In the late 1970s and early 1980s, it was spending about £700m a year (in current terms). However, as the Central Electricity Generating Board and its associated laboratories were prepared for privatisation, spending began to rapidly fall. It had been intended that the commercial energy sector would expand its RDD spending to fill the gap, but there’s little evidence that it actually did. After public spending in this area had fallen by a massive 95% by the early 2000s, the Labour government decided it had a serious problem and started ramping up spending again. This passed £500m in 2010 before being sharply cut by the incoming Conservative-led Coalition government as part of its austerity policies. In 2013 (the latest year for which data are available), total energy RDD spending was £362m. 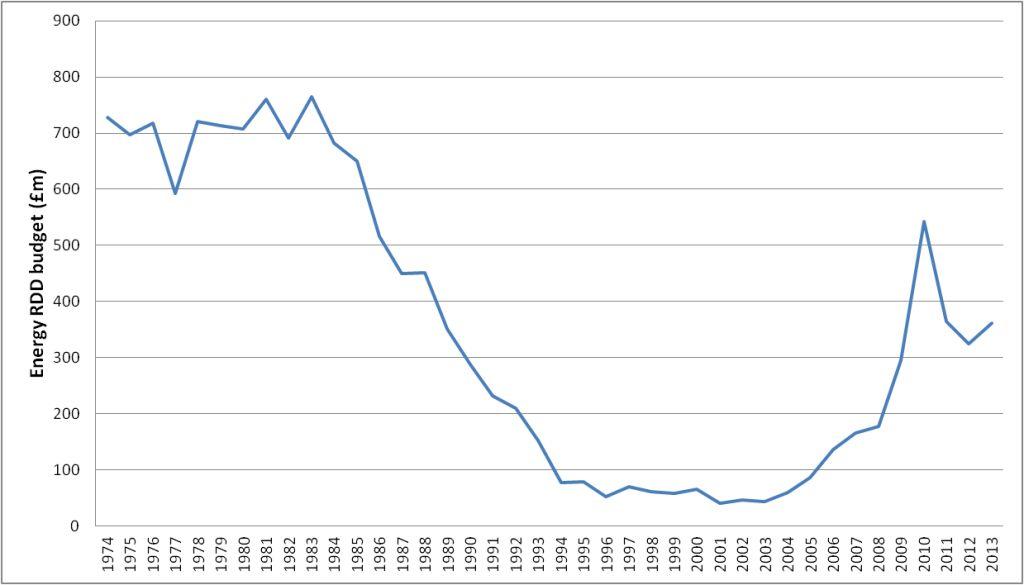 What about the spending on each of the main energy technologies? This is shown in figure 2 below for 2003-13. While nuclear fission RDD dominated in the 1970s/80s, there has been rather more of a mixture in the recent budgets. In the early 2000s, with major cuts across the board, bizarrely, it was actually nuclear fusion research that received the highest levels of public funding. The Labour government, following publication of its 2003 Energy White Paper that favoured renewables and energy efficiency, rapidly increased RDD spending in these areas. Carbon capture and storage (CCS) also started to receive more funding. After Tony Blair’s embrace of nuclear power in 2007, there were some increases in budgets for nuclear fission RDD. When the Coalition government came to power, it made large cuts to the RDD budgets for renewables – especially for wind (71% cut), solar (64%) and marine technologies (57%). There were also large cuts in spending on energy efficiency, but there was a further increase for nuclear fission. Despite this, in 2013, energy efficiency and renewables RDD spending each remained above CCS and nuclear technologies – although subsequent policies and programmes indicate this may have changed since. 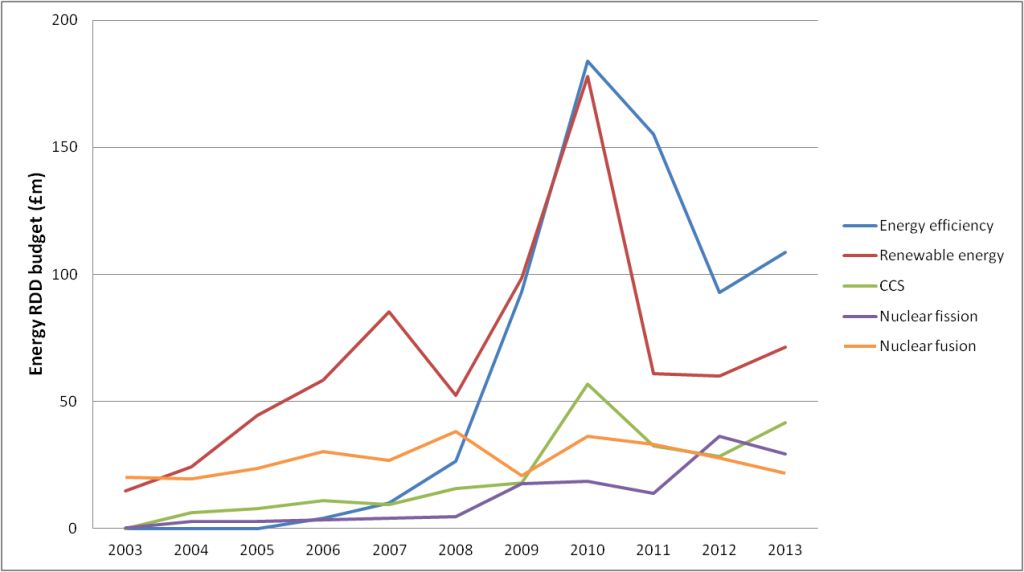 The Coalition’s R&D policies and priorities

In terms of relevant policies and programmes pursued by the Coalition government over the past five years, there are a few that deserve special mention.

In 2011, the government launched the first of a group of ‘Catapult Centres’ intended to improve links between academic research and industry. Each centre was provided with core funding – amounting to several million pounds a year – and then sought further funding from public and industry sources. One of the first Catapult Centres focused on offshore renewable energy – including offshore wind, tidal and wave.

In autumn 2012, the Chancellor announced £600m of additional multi-year funding for R&D on ‘Eight Great Technologies’. One of these was ‘Energy and its storage’. Science Minister David Willetts defined technologies in this area as:

It is interesting to compare this choice of R&D priorities to those recommended in an earlier report by the Committee on Climate Change (CCC) – the government advisory body in this area. While the CCC had also suggested that energy storage technologies should be given priority for R&D support, significantly, it had recommended solar photovoltaics for further support, not small-scale nuclear power. The government had ignored this advice.

Also notable was the Coalition’s Long-term Nuclear Energy Strategy, published in 2013, in which there was a major emphasis on R&D to help markedly expand this sector out to 2050.

The government’s ten-year science and innovation plan – published at the end of 2014 – was especially revealing in the way it presented opportunities in energy R&D. Emphasis was placed on R&D in the nuclear power sector, while innovation in renewable energy received only brief coverage. The need to exploit shale gas in the UK was emphasised, despite it not being a low-carbon energy source, while – incredibly – the threat of climate change was not explicitly mentioned.

It’s also revealing to compare the UK government’s R&D spending on energy to that in another technology-intensive sector: defence. In 2012 (the latest year for which data are available), UK military R&D spending by the government stood at £1,460m – over four times that spent on energy R&D. Indeed, SGR’s own analysis of government data showed R&D spending just on Britain’s nuclear weapons system was five times higher than that spent on renewable energy.

Given the major security threat of climate change – which the government has acknowledged – this is a stark imbalance that needs to be addressed.

Reading between the lines

In the Queen’s Speech, the new government’s first policies for the energy sector were restrictions for onshore wind and new support measures for offshore oil and gas exploration. Neither bodes well in struggle against climate change. Taken with the above analysis, I draw the following conclusions about the UK’s energy R&D policies:

It is telling that the Global Apollo Programme is focused on a major global R&D effort on wind and solar power, together with energy storage technologies. This is where it identifies the largest shortfall of research spending and a major potential for rapid gains. The new UK government needs to take note – and change its R&D priorities accordingly.

Dr Stuart Parkinson is Executive Director of Scientists for Global Responsibility, and has written widely on energy and climate issues.

1. Although it is common in this field to discuss research and development (R&D), the International Energy Agency compiles its country data using the broader category of research, development and demonstration (RDD). When referring to the IEA’s data, I have used the term, RDD, but in other cases it is generally appropriate to use the more common term, R&D.
2. Spending on a range of other energy RDD areas is not shown to avoid making the graph too complicated. The total for these other areas rose to £82m in 2013. Figures for nuclear fission and nuclear fusion spending in 2007 were estimated based on incomplete IEA figures. The spending figures in these two areas for 2010 are likely underestimates. More explanation on request.