Prof John Holmwood, University of Nottingham, critically examines the increasing commercialisation and privatisation of UK universities, as demonstrated by the new Higher Education and Research Bill.

The UK Government’s Higher Education and Research Bill [1] is currently passing through Parliament. It completes the radical transformation of higher education set out by the coalition Government in 2011. The explicit intention was to reduce public spending after the financial crisis of 2008 by shifting its costs from tax payers onto students via loans (and, of course, onto the same students as future taxpayers once the repayment shortfall becomes a cost on the exchequer).

The passage of the Bill has not been delayed by the vote to exit the European Union, notwithstanding that the vote promises to severely disrupt higher education with respect both to the recruitment of overseas and EU students and EU funding for research. Perhaps this sanguine attitude on the part of Government is to do with the very intention of the Bill which is to ‘disrupt’ higher education by a radical programme of marketisation and privatisation.

The Bill was preceded by a White Paper,[2] which described higher education in the UK as world-class, with “globally renowned teaching and cutting-edge research and innovation.” Yet it proposed fundamental changes to the very frameworks that have hitherto guaranteed this success and threatened the wider public goods that universities provide.

The only benefits that the Government recognises are the private benefit deriving from investment in human capital – hence ‘student beneficiaries’ should pay through fees – and the contribution to economic growth. But this economic growth is not inclusive. Indeed, the Government’s version of a knowledge economy has made the UK the most unequal country in the European Union (and one of the most unequal in the world).

The minister, Jo Johnson, has expressed his concern for social mobility and the need to increase the number of students from disadvantaged backgrounds at what he calls the ‘top’ universities. However, the Government has also ended maintenance grants for the poorest students, replacing them with loans. At the same time, it wants to increase provision by for-profit providers, institutions that, wherever they are found, are associated with poor student outcomes, with spending more on marketing and profit-sharing than on teaching, and with targeting students from low income backgrounds and returners to education.

The Bill proposes to allow for-profit providers to have access to the full range of fees and to have the title of university, with degree-awarding powers. It seeks to speed up the process by which they gain such recognition. They call this the creation of a ‘level playing field’, yet private providers are relieved of obligations to conduct research or to contribute to their local communities. At the same time, they are allowed to put existing universities with those functions under direct competitive pressure. The level playing field is open to ‘free riders’. This is the context in which the Government ‘expects’ the closure of institutions – indeed, it regards such closures as the sign of a healthy market.

The Government makes much of the importance of institutional ‘autonomy’. However, this is not the ‘autonomy’ traditionally associated with the independence of university teaching and research, but that of a market-based corporate agent. At the same time, neo-liberal public policy also requires strongcentralised direction which is precisely what the Bill provides.

Teaching and research are to be divided between two regulatory offices, the Office for Students and UK Research and Innovation (UKRI), a separation made necessary by the entry of for-profit, teaching only institutions. Privy Council Charters of older universities are to be revoked, [3] as are the Royal Charters of the Research Councils. The provisions for each office give powers to the Secretary of State to intervene directly (and by nominee) in their direction. These will be executive powers unconstrained by scrutiny by Parliament, or by Privy Council. In the case of teaching, it includes powers that go beyond quality assurance of teaching standards to influence the content of the curriculum. We have also seen Government indicate a willingness to use the new Teaching Excellence Framework as an instrument of immigration policy by proposing to limit overseas students to institutions and courses in line with their TEF ‘medal’ score. [4]

In the case of research, the Secretary of State has reserved powers to determine decisions about research funding. Notwithstanding debate about the precise meaning of the ‘Haldane Principle’, [5] it was recently affirmed as entailing; “that researchers are best placed to determine detailed priorities; that the government's role is to set the over-arching strategy; and that the research councils are ‘guardians of the independence of science’.” [6] In the Green Paper and White Paper that preceded the current Bill, the Haldane Principle was affirmed along with principle of dual-funding, but there is no mention of it in the Higher Education and Research Bill. This is unsurprising given that the role of Research Councils as ‘guardians of the independence of science’ is now under the direct authority of the Secretary of State.

The merger of Research Councils and Innovate UK within UKRI also indicates that the over-arching strategy will increasingly be ‘outcome-oriented’ and concerned with economic impact. Paradoxically, despite the emphasis on a knowledge economy, investment in research and development has declined, with the UK once leading such investment (in terms of proportion of GDP) in the OECD to now one of the lowest. [7] In the context of wider neo-liberal policies, Government has fewer levers to increase necessary investment in the private sector. In consequence, universities are now to be directed to resolve the failure of private investment, notwithstanding the claim that markets are efficient and need only to be facilitated in their operation.

It is precisely the short-term orientations to profit and shareholder value associated with neo-liberal policies that explains the decline in private investment. However, the impact agenda for university research is itself designed to shorten the time from ‘idea’ to ‘impact’ (‘income’). Yet as both Philip Mirowski [8] and Marianna Mazzucato [9] have shown that not only do neo-liberal policies seek to socialise risks while privatising rewards, but they also encourage university research to re-direct their research toward activities that can provide short term returns favoured by venture capital.

With the emphasis on competition for funding, university strategies are directed toward research-grant capture and mirroring of (Government-approved) strategic priorities. There is convergence on ‘challenges’ that do not derive from the curiosity of researchers, but from the setting of targets and framing of topics by senior research policy-makers within universities and within Research Councils. Increasingly, all universities direct their research toward the same thematic priorities, including an emphasis on applied problem-solving interdisciplinary research. This undermines the significance of the very dual-funding system by aligning funding based on past research with funding for future research and puts both in the hands of managers whose own interest is revenue over research.

Where are the defenders of the public university?

I began this piece with the UK vote to leave the European Union. One of the key moments of the debate was Michael Gove’s declaration that people have “had enough of experts”. The Times Higher Education has recently referred to “a populist politics hostile to campus culture”, [10] and many within universities have, indeed, felt the chill of populism directed against evidence-based argument. But what of ‘campus culture’’?

Part of the problem is that there has been a failure to defend the university as an independent institution of the public sphere serving public debate. Government has defined the benefits of the university in terms of private economic benefit (and, in the impact agenda, contribution to Government policy). University vice-chancellors have sought to maximise income and, therefore, have avoided direct public criticism. The Russell Group has supported all policies that might increase the proportion of income it receives. The Campaign for the Social Sciences, for its part, produced a report, tellingly called The Business of People, [11] designed for politicians and policy-makers prior to the last election in which it made no reference to the role of social science in democratic debate. [12]

Responsible science requires responsible publics and knowledgeable citizens. This should be one of the prime functions of universities. Yet recent government policy is designed to undermine that function and place universities under government direction. And university leaders increasingly see their role as securing the bottom-line and protecting their brand. Who now will defend the integrity of the university and its culture?

John Holmwood is Professor of Sociology at the University of Nottingham. He is a former President of the British Sociological Association. He is co-founder of the Campaign for the Public University - http://publicuniversity.org.uk/ - and a co-editor of the free monthly online magazine of social research, commentary and policy analysis, Discover Society - http://discoversociety.org/. He is a participant in the Convention for Higher Education - https://heconvention2.wordpress.com/ - and co-author of its Alternative White Paper: Knowledge for a Successful Society.

[7] Jones R (2013). The UK’s Innovation Deficit and How to Repair it. SPERI Paper No.6. University of Sheffield. http://speri.dept.shef.ac.uk/wp-content/uploads/2013/10/SPERI-Paper-No.6-The-UKs-Innovation-Deficit-and-How-to-Repair-it-PDF-1131KB.pdf

[11] Campaign for Social Science (2015). The Business of People. https://campaignforsocialscience.org.uk/businessofpeople/ 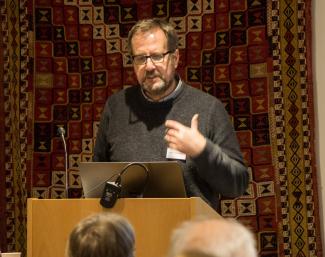