Dr Stuart Parkinson, SGR, critically examines the UK’s latest policies on climate change and security in the context of the Paris climate negotiations – and argues for a major change in direction.

Climate change and the Syrian war

As we approach the latest round of international climate change negotiations in Paris, Prince Charles has highlighted scientific research published in early 2015 which uncovered the potential role of climate change in contributing to the outbreak of war in Syria in 2011. The research, carried out at US universities, pointed out how a drought in Syria lasting from 2007 to 2010 led to widespread crop failure and a mass migration of farming families to town and cities. This fed unrest which led to violence in a country already suffering from what has been politely called ‘poor governance’. Crucially, the US researchers point out that the 2007-10 drought was the worst in the instrumental record, and that long term meteorological data and climate models suggest that such droughts are two to three times more likely than would be expected from natural variability alone. The researchers are clear that the causes of the Syrian war are complex and multi-faceted, but the study does provide important evidence of the ‘threat multiplier’ effect of climate change already acknowledged by leading climate scientists – and the UK government.

All this makes the recently announced UK policies and strategies on climate change and security especially disturbing.

On climate change, since the new government came to power in May, we have seen major cuts to financial support for renewable energy – with onshore wind, solar photovoltaics and community-scale technologies being hardest hit. This is despite many of these technologies exceeding targets for deployment. The cuts mean renewable energy targets are now at risk, as are thousands of jobs. We’ve also seen one national home energy efficiency scheme cancelled with no replacement in sight, while funding for another is being reduced, and zero carbon targets for new homes and buildings abolished. The tax differential between high and low pollution cars has been reduced, large-scale airport expansion is proposed, and no progress is being made in tackling carbon pollution from agriculture.

The government has tried to offset the cuts with a proposal to phase out the use of coal – the highest carbon fuel – in power stations by 2025 (unless they are fitted with carbon capture technologies – government funding for which has also been cut). However, two of the main replacements for coal are planned to be an expansion of natural gas – with an increasing proportion from shale gas wells in the British countryside – and large new nuclear power stations. Life-cycle carbon emissions from conventional natural gas are at least nine times greater than renewables, while those from shale gas are even higher – and the latter creates additional risks of local water, land and air contamination. Meanwhile the national and international nuclear power industry has been experiencing major difficulties since the Fukushima accident, if not before. The current frontrunner for a plant in the UK is the European Pressurised Reactor. One is currently under construction in France, one in Finland and two in China. The one in France is six years late (and counting), costs have more than trebled, and it is under examination by the safety regulator over possible weaknesses in the reactor pressure vessel. The one in Finland is nine years late (and counting), costs have nearly trebled and it is at the centre of a legal battle. There are also doubts about the two in China. Estimates of the earliest a new plant could come on stream in the UK have slipped to 2025. Only plans to continue the expansion of offshore wind offer a serious attempt to tackle carbon emissions from the energy sector.

The skewed priorities can be clearly seen in how the targeting of subsidies has been changing. Britain is the only one of the leading G7 economies which is expanding fossil fuel subsidies. Furthermore, the solar energy industry has pointed out that, for only 50% of the subsidies being offered to new Hinkley Point C nuclear plant, it could deliver an equivalent amount of electricity (including back-up). Even more could be achieved with cheaper onshore wind.

The Committee on Climate Change has repeatedly warned the government over the last few years that it needs to expand its action on cutting carbon pollution, but the policies and strategies now being implemented are making it less and less likely that the UK will deliver its fair share of global reductions.

The difference compared to the military-industrial sector could hardly be starker. As part of the latest Strategic Defence and Security Review (SDSR), the government has announced an extra £12 billion for military equipment. The total budget for equipment over the next ten years has thus risen to an eye-watering £178bn. One of the largest parts of this budget is earmarked for Britain’s nuclear weapons system, which includes replacement of its four submarines at a cost now projected to be at least £31bn. As SGR has pointed out in a recent report, just one of these submarines carries an explosive payload greater than that of all the bombs dropped in World War II and this is capable of causing catastrophic climatic cooling – known as ‘nuclear winter’ – due to the blanket of smoke that would result if these warheads were exploded over combustible targets (like cities). Concerns about the risks posed to such systems by cyber-attack have recently caused a retired US General and former UK Defence Secretary to speak out. An accidental launch would be no less catastrophic than an intentional one. It’s no surprise then that 135 countries recently voted at the UN to start a process to completely ban these weapons. Notably, Britain voted against the proposals.

The extra funding provided by the SDSR will also allow the trebling by 2023 of the number of F-35 Lightning fighter-bombers which can be deployed on Britain’s two huge new aircraft carriers. This will provide a much greater capability to carry out more air strikes such as those currently being undertaken over Iraq and now planned for Syria. This is despite the lack of success of such raids (and other military intervention) over the last decade in helping to bring stability to the Middle East and North Africa – and the increased possibility of clashes between NATO and Russia, as exemplified by the Turkish shooting down of a Russian jet. Leading security analysts, politicians and journalists have pointed out that we need to put much more effort into cutting the flows of money, foreign fighters and arms to the region, and to provide more humanitarian assistance and diplomatic engagement, if we are to have any hope of reducing casualties and bringing the wars in that region to an end – and the terrorism they fuel in Europe and elsewhere.

One area, however, where the UK should be commended is its International Climate Fund which is aimed to help developing countries adapt to climate change and cut carbon pollution. However, its increased annual budget is still only equivalent to about 3% of the national military budget.

The distorted priorities of the UK on climate change and security have many parallels internationally. Perhaps the most obvious is the enormous $1,800 billion currently being spent annually on the world’s military forces, while the inadequate climate pledges being presented at the Paris negotiations – known as INDCs in official climate jargon – would collectively only keep global temperature change to about 2.7°C by 2100, well above the 2°C internationally agreed by nations as necessary, and nowhere near the 1.5°C demanded by the most vulnerable countries. Analysis by the Intergovernmental Panel on Climate Change shows that about $500bn a year of extra finance is needed to give us a 50% chance of hitting the 2°C target. It would not be unreasonable to cut military funding to provide at least some of this extra money.

The case of Syria shows just how badly things can go wrong in a developing country when climate change multiplies existing failure on issues such as poverty alleviation, sustainable farming, cultural tolerance and democratic reform. Meanwhile the case of Britain shows that distorted priorities within industrialised countries can multiply the threats from climate change and fail to address international security problems. The collective result is immense human suffering and spiralling costs as attempts are made to bring about security.

So let’s get our priorities right. Let’s put proper funding into tackling climate change and other roots of conflict, and move away from prioritising military hardware, before things really spin out of control. 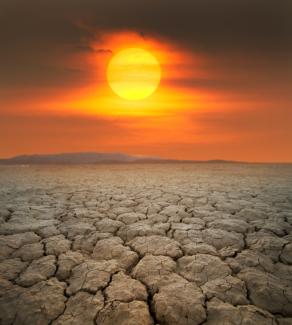