In the nuclear armed countries, our politicians routinely tell us that nuclear weapons are the ultimate guarantee of our security. They also claim that nuclear weapons have kept the peace through nuclear deterrence since their use by the USA against Japan in 1945 at the end of the Second World War. Dr Philip Webber, SGR, presents evidence in this article that throws serious doubt on both these claims.

Are nuclear weapons the ultimate guarantee of our security?

Following detailed research and the uncovering of numerous previously secret reports, we now know that nuclear weapons made the Cold War much more dangerous and that nuclear devastation was only narrowly avoided by a combination of luck and, in some cases, senior commanders refusing to launch missiles. According to the leading UK think-tank Chatham House, there was an incident of ‘near nuclear use’ on average every three years between 1962 and 2002. [1] Examples include false alarms (for example a Norwegian weather satellite launch mis-identified as a nuclear attack); a military exercise mistaken as preparation for a real attack; several instances of faulty equipment (for example a computer chip generating an attack alert); human error; and political brinksmanship.

Have nuclear weapons ushered in a new era of peace since World War 2?

The US 2018 Nuclear Posture Review (NPR) states: "Since the introduction of U.S. nuclear deterrence [in 1945], U.S. nuclear capabilities have made essential contributions to the deterrence of nuclear and non-nuclear aggression. The subsequent absence of Great Power conflict has coincided with a dramatic and sustained reduction in the number of lives lost to war globally". [2] But up to 1991 and the break-up of the Soviet Union, around 11 million people died in 16 ‘proxy wars’ as the Western and Eastern blocs vied for power. [3] These included the Korean War, the Vietnam War, and numerous conflicts in Africa, Latin America and East Asia. This does not include numerous other conflicts in the Cold War period that did not directly involve the ‘Great Powers’. Furthermore, since 1991, several violent conflicts have led to the deaths of enormous numbers of people and created tens of millions of refugees. Examples include the Balkans wars, the Rwandan genocide, continuing wars in the Congo and Sudan, US-led invasions in Iraq and Afghanistan (with conflict still continuing over a decade later), and ongoing horrific conflicts in Syria and the Yemen.

Unfortunately, today, the risk of nuclear disaster remains - mainly because of the growing threat of cyber-attack; but also because nuclear weapons have continued to spread to more countries. Those with nuclear weapons also have incredibly expensive plans to ‘modernise’ them and to make them more ‘useable’ (for example, the US NPR and similar Russian plans). The US nuclear budget is a staggering $1,200bn over the next 30 years; [4] and new UK nuclear powered submarines and warheads will cost around £205bn (approximately $250bn) over a similar time period. [5]

Defence spokespeople state that systems are immune from hacking because they are not connected to the internet and are ‘air-gapped’. But wireless capabilities are widely embedded in devices and appliances. Nuclear launch systems and communications are regularly targeted in cyber-attacks. [6] Malware can be hidden in software updates or embedded in a microchip. Even equipment as seemingly trivial as a wireless-enabled vending machine in a command and control site can be used to mount a hacking attack. During a crisis, previously undetected malware would be activated and could cause sufficient confusion for nuclear launch to be authorised by mistake. US and Russian missiles kept permanently on high-alert pose a very serious risk in this regard.

As I explained in a recent HuffPost article: ‘What the Earth could look like after nuclear attack’, [7] even a few hundred warheads is a devastating threat capable of killing millions within 30 minutes and destabilising the Earth’s climate for a decade. All the nuclear war planning exercises confirm that it is simply impossible to win a nuclear war. The US-Russian scenarios lead to enormous levels of casualties and destruction whilst even a ‘regional’ conflict between India and Pakistan with as few as one hundred Hiroshima-sized weapons would cause a long-lasting global disaster.

To follow the logic of arguments in favour of nuclear deterrence used by the UK and other nuclear-armed states, if nuclear deterrence ‘works’ then every state should be armed with nuclear weapons. Such thinking has been the driver of nuclear arms races in the Cold War, or the nuclear stand-off between India and Pakistan and is clearly understood by North Korea.

But the nuclear-armed states insist that they require nuclear weapons for their security whilst at the same time arguing that other non-nuclear states cannot have them to avoid creating greater insecurity. This double standard has been widely denounced at the UN by the non-nuclear armed countries; particularly as progress on disarmament has almost stopped and huge arsenals remain (a best estimate of the current global total is 14,200 warheads [8]).

The end point of these discussions at the UN in 2017, supported by over 100 countries, was to agree the Treaty for the Prohibition of Nuclear Weapons (TPNW) which prohibits development, deployment and possession of nuclear weapons. [9] Clearly nuclear weapons should be considered in the same way as other weapons of mass destruction, such as biological and chemical weapons, that are regarded as against all the norms of warfare and banned in international law. Even less powerful weapons such as cluster munitions and antipersonnel mines are prohibited by international agreements.

The TPNW will become legally binding once 50 nations have formally ratified it, probably sometime towards 2019. But perhaps more importantly, it has become clear that the non-nuclear states, humanitarian organisations such as the Red Cross and civil society, particularly the younger generation, reject nuclear weapons and urge action towards disarmament to escape being held hostage to the ever-present nuclear threat.

So far, threats to use thousands of nuclear weapons have not resulted in their use in war since 1945. But their existence does not keep us safe - it has created the growing risk of a global nuclear catastrophe: millions dead within 30 minutes, a destabilised world climate and huge radioactive dead zones for decades into the future. Furthermore, no one can seriously argue that nuclear deterrence can prevent nuclear war by accident, mistake, cyber-attack or terrorism.

The threat of nuclear war is an existential threat to everything positive that humanity has achieved so far. Despite persistent atrocities and terrible ongoing conflicts, we live in an increasingly interconnected world and we all depend in our daily lives on each other for goods and services sourced across the globe. Our best common hope for greater peace is to keep building upon greater interdependence and co-operation.

Most of the nuclear-armed nations opposed the TPNW in a misplaced attempt to cling on to nuclear weapons as totemic symbols of political power, but it is in their and our common interest to positively engage with the Treaty and to reduce the levels of global nuclear threat to zero in due course.

Doing this would free up substantial resources for a whole range of more beneficial uses such as health care, social programs, environmental protection and improved infrastructure.

This article was first published on the Huffington Post UK website. This version includes references and some updated figures. 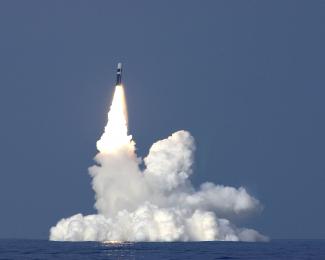