The huge increase in the UK military budget – see Stuart Parkinson’s article – includes £1.4bn over ten years to set up a British Space Command. The aim of this body is “to enhance the UK military command and control of the space domain, assist in coordination of commercial space operation and lead the development of new space-based capability”. [1,2]

In 2019, the Ministry of Defence (MOD) announced a £30 million military space programme supported by a team working closely with the USA, to launch a small satellite demonstrator which would beam high-resolution video directly into the cockpit of fighter jets. Miniature satellites are relatively cheap to produce, launch and place in Low Earth Orbit and are being increasingly deployed for commercial and military purposes. Government grants totalling nearly £40 million have been awarded to enable the launch of small satellites from UK spaceports, and the government has paid Lockheed Martin – the world’s largest arms corporation – £23.5 million to identify suitable UK spaceport locations. Scotland is well positioned geographically for the launch of satellites into orbits suitable for communications and earth-observations and rockets are planned to be launched from there by 2022. The Edinburgh-based Skyrora Ltd carried out the first successful test launch of its Skylark nano-rocket from the Scottish Highlands in June 2018 and is keen to become the go-to UK launch company.

The UK is also focussing on the production of miniature satellites through Surrey Satellite Technology Limited (SSTL).  Elon Musk’s SpaceX company bought a 10% share in SSTL in 2005 and the European Aeronautic Defence and Space Company (now Airbus) acquired another 80% in 2008. SSTL has since captured 40% of the global small satellite market and received over £4 million from the MOD to develop a small, low-orbit satellite called Carbonite 2, which was launched in 2018 to provide high-resolution reconnaissance.

Space is now big business and seen by the government as one potential path to recovery from the economic havoc caused by COVID-19. Forecasts suggest it could be worth over $1 trillion by 2040 and the UK aims to capture 10% of the market by 2030. A consortium of Local Enterprise Partnerships which bring together local authorities, academic institutions, research groups and businesses are establishing several regional space-hubs around the UK to ensure that space is a priority for regional economic growth. Among them is ‘AstroAgency’ which operates across Scotland on behalf of the Scottish Space Leadership Council.

Lockheed-Martin has chosen Unst – one of the Shetland islands – to develop its own Shetland Space Centre (SSC) for vertical launch operations. Situated at a high latitude, Unst is well placed for launching satellites into polar orbits – often used for reconnaissance, weather, or communications satellites. There are plans for other spaceports in Scotland (see map) – on the A'Mhoine Peninsula in Sutherland County in the Highlands and on an island in the Outer Hebrides, along with two others from which to conduct plane-based horizontal launches – at Prestwick and Argyll. All of these spaceports have joined together under the Scottish Space Leadership Council to form the Spaceports Alliance and others planned for Cornwall and Wales look likely to become members in the near future.

Figure: Locations of the main space-ports planned for Scotland

The Scottish spaceports are promoted by Highlands and Islands Enterprise (HIE) and the UK Space Agency (UKSA) and welcomed by the Scottish Minister for Trade, Investment and Innovation. But there has been opposition from environmental groups, heritage bodies and local residents, so these plans are still not settled.

Space activities are usually presented to the public as having significant commercial value and the promise of new jobs, but the military dark side is always present. Space operations are often useful to both commercial and military sectors and UKSpace, the trade association of the British space industry, works closely with the RAF through the Commercial Integration Cell at the MOD’s Space Operations Centre (SpOC). A similar set up in the USA sees the Space Force and the Combined Space Operations Centre at Vandenburg Air Force Base working to improve interoperability between member nations of Operation Olympic Defender (OOD). OOD was established to build international partnerships to ‘deter adversaries and hostile acts in space’ and the UK was the first to join in 2019. The UK is also the first to gain access to the US Standardized Astrodynamics Algorithm Library (SAAL) which contains information to help predict the locations and trajectories of satellites and objects in orbit. Access to SAAL enables the streamlining of multinational military operations across the globe and will also increase the ability of the SpOC to collaborate and share data with the US Space Force.

So, the UK is now well on the way to being directly involved in US plans for space domination.

David Webb is emeritus professor of engineering at Leeds Beckett University, chair of the Campaign for Nuclear Disarmament, and a director of Global Network Against Weapons and Nuclear Power in Space.

1. Overarching details of the UK military’s space activities are given in: MOD (2021). Defence in a competitive age. Defence paper. March. https://www.gov.uk/government/publications/defence-in-a-competitive-age

2. Further analysis of the issues covered in this article (including references) is given in: Webb D (2021). No Space for Peace in the Integrated Security Review. Yorkshire CND. May. https://yorkshirecnd.org.uk/no-space-for-peace-in-the-integrated-security-review/ 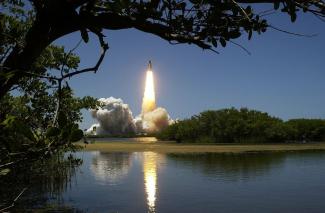