Skip to main content
Is your pension fund wrecking the planet?

Dr Emily Heath, Ethics4USS, appeals to academics and others to support the campaigns to divest our pension funds from fossil fuels and other unethical industries.

Half of all the money in the world is invested via pension funds: £3 trillion in the UK alone. [1]  Diverting these funds from harmful to beneficial uses is a powerful way to change the world. What progress has been made by divestment campaigns, and how can we apply more pressure to unethical pension funds, such as the Universities’ Superannuation Scheme (USS)?

USS holds assets worth £70 billion on behalf of its 420,000 members from mainly pre-92 universities. [2]  More than £1.1 billion is invested in fossil fuel extraction, and USS also has significant holdings in airports and airlines. [3]  The retirement savings of university staff are exacerbating the climate crisis, putting lives at risk.

The global fossil fuel divestment movement is growing rapidly, stigmatizing the world’s biggest polluters and accelerating the transition to a low-carbon society. By September 2019, 1,115 institutions worldwide, worth over $11 trillion, had broken their ties with the fossil fuel industry. [4]  These institutions include sovereign wealth funds, banks, insurance companies, local authorities, pension funds, universities, charitable trusts and faith groups. This is a fantastic achievement!

However, USS remains resistant to divesting, despite a long-running campaign for it to invest ethically.  The Ethics4USS campaign is led by academics, and has close links with organisations such as ShareAction, National Union of Students, University & College Union (UCU) and People & Planet. Recent tactics have included petitions, formal complaints, meeting with USS representatives and protesting at USS AGMs.

USS’s approach to responsible investment doesn't exclude investment in unethical industries, but aims to influence companies through shareholder engagement. However, USS’s voting record is worrying. At the Royal Dutch Shell AGM in 2018, USS voted against a shareholder request to publish targets consistent with the Paris Climate Agreement goal of limiting global warming to no more than 2°C. At the Lundin Petroleum AGM in 2017, USS voted for the reappointment of two senior executives who were, and still are, under investigation for aiding and abetting war crimes in Sudan between 1997-2003. [5]

In the past, fossil fuel companies have been attractive for pension funds, producing high levels of dividends even if the value of the company (the share price) is relatively static. However, the rapidly growing climate emergency changes everything. Uncontrolled climate change brings social and economic chaos, increasing levels of risk for all investments. And as the world transitions away from fossil fuels, companies like Shell will lose value, as they will be lumbered with stranded assets and, perhaps, made to pay compensation for their reckless pollution and history of funding campaign groups which have undermined climate science. [6]

USS has a main ‘Defined Benefits’ (DB) fund, and in 2016 it launched a suite of ‘Defined Contributions’ (DC) funds. Members who are making additional voluntary contributions, or who are earning more than £59k, can choose which of these to pay into. A very good ethical investment policy is applied to some of these optional DC funds. They are performing well, suggesting that a wider roll-out of USS’s ethical investment policy would benefit USS members as well as the planet. So far, only a small proportion of USS members have actively chosen to invest in an ethical fund [2] rather than the default (unethical) DC fund, although a large majority of members say that they are interested in ethical investment in USS member surveys.

USS has a poor track record of listening to its members. Only three of USS's twelve non-executive trustees are nominated by UCU, directly representing the employees and pensioners for whom USS exists. Around a quarter of USS staff are paid in excess of £100k, with annual pay and bonuses of £1.75m for each of the two highest-paid executives, and an appalling gender pay gap of 41%. [2]  USS recently sacked a UCU-nominated trustee - Prof Jane Hutton - after she blew the whistle on the lack of transparency in the pension fund valuation. [7]  This valuation lies at the heart of an ongoing dispute which prompted UCU members to strike for 14 days in 2018 and 8 days in 2019, with more strikes likely in 2020. [8]  Ethics4USS supports UCU in calling for USS to reform its governance and be more accountable to its members.

Ethics4USS is campaigning for USS’s main (DB) fund, and the default option for the DC fund, to be invested ethically. We are determined to succeed!

What you can do

High carbon companies in which USS pension fund is invested 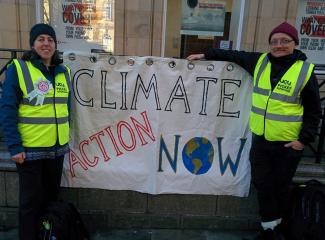